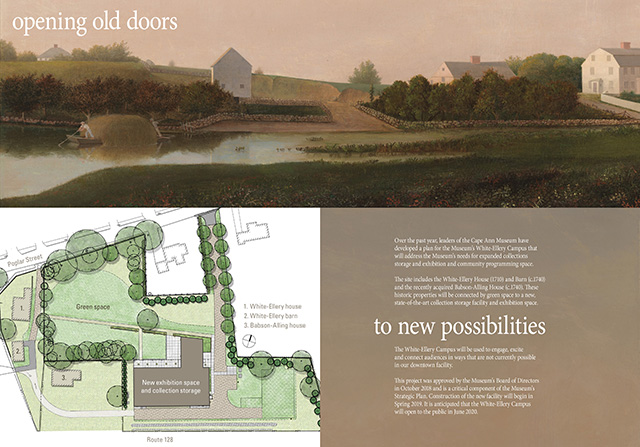 Over the past year, leaders of the Cape Ann Museum have developed a plan for the property surrounding the Museum’s White-Ellery House that will address the Museum’s needs for expanded collections storage and exhibition and community programming space.

The site includes the White-Ellery House (1710) and Barn (c.1740) and the recently acquired Babson-Alling House (c.1740). These historic properties will be connected by green space to a new, state-of-the-art collection storage facility and exhibition space.

The White-Ellery Campus will be used to engage, excite and connect audiences in ways that are not currently possible in our downtown facility.

This project was approved by the Museum’s Board of Directors in October 2018 and is a critical component of the Museum’s Strategic Plan. Construction of the new facility will begin in Spring 2019. It is anticipated that the White-Ellery Campus will open to the public in June 2020. 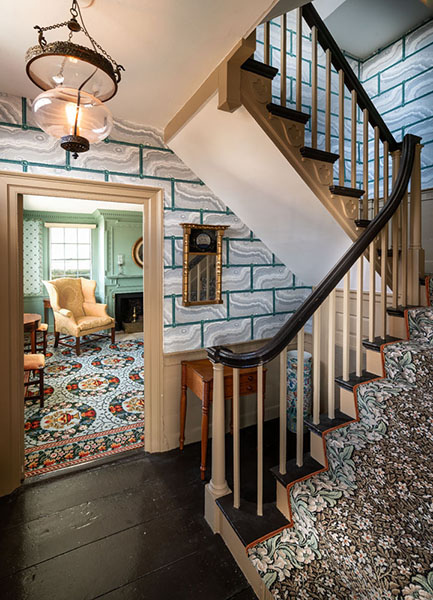 In 1796, Captain Elias Davis, Sr. (1758–1821) purchased land on Pleasant Street, also known as "Captains Row," in Gloucester's Harbor Village. He hired Colonel Jacob Smith (1765–1812) to design and build a three-story house for his family and took up residence in 1804. "Housewright" Smith was very active on Cape Ann during the Federal era of American architecture. Smith also built the Independent Christian Church in Gloucester and the Congregational Churches of Rockport and Manchester. Captain Davis married Lucy Haskell (1762–1847) on February 9, 1780. Their union produced thirteen children (six girls, seven boys), nine of whom lived to adulthood. Three sons followed in their father's footsteps and became sea captains. The interior of the Davis House, which can be seen on docent-guided tours, exhibits a stately mix of Georgian and Federal detail. Five rooms are decorated with the belongings of the Davis family and other treasures from the period. Read more about the Davis House here.