→ Read the article in the Boston Globe here 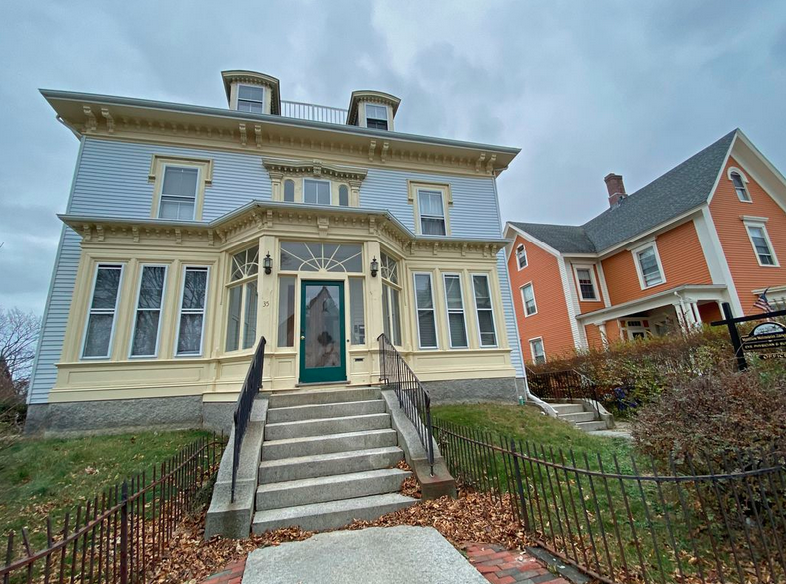 How a house at 35 Middle St. in Gloucester looks today. It was the subject of a painting by Edward Hopper in 1926. Photo: Diane Bair.

When you think “Gloucester” and “art,” you probably think of seascapes and schooners, and the local painters who captured the scene, like Fitz Henry Lane. Edward Hopper (1886-1967) wasn’t that guy. “At Gloucester, when everyone else would be painting ships and the waterfront, I’d just go around looking at houses,” said the artist, who hailed from Upper Nyack, N.Y., and made his first visit to Cape Ann in 1912.

In the early 20th century, he spent several summers in Gloucester with his muse (who later became his wife), artist Josephine Nivison. Exploring the city by foot and by streetcar with “Jo,” Hopper fell in love with the cityscape and the variety of architectural styles that define Gloucester. During their summers on Cape Ann in 1926 and 1928, Hopper produced some of his finest work.

And there’s this: “Twenty-six houses exist today in Gloucester that have been painted by Edward Hopper,” said Elaine Ohlson, a tour guide at Cape Ann Museum. We joined Ohlson and a small group of others on a recent chilly Sunday for a look at six of these buildings in Gloucester’s historic district.

For those who miss the museum experience, but not yet inclined to spend time inside a public space, these outdoor walking tours are perfect — they kind of scratch that itch, as one participant noted. Plus, your tour fee gets you into this intimate, engaging museum if you’re tempted to take a quick peek. We’d suggest making a bee-line to Hopper’s “Cemetery in Gloucester,” a Conté crayon sketch the artist drew in the 1920s, the only Hopper in the museum’s collection.

We weren’t sure about the prospect of a guided walking tour while bundled up and spaced apart; would this even work? Happily, yes — and you don’t have to be an art history major, or even well-versed in Hopper, to get something out of it. Given the circumstances, we weren’t convivial as a group, but then, neither was the artist, Ohlson said. “He was not the person you’d want to chat with at a cocktail party,” she noted. “His wife once said that talking to him ‘was like dropping a stone into a well except that it doesn’t thump when it hits bottom.’ ” But it was intriguing to wander around town with a guide and see the “before” — a print of Hopper’s painting — and the “after,” what the building looks like now, nearly a century later.

Seeing these houses on a gray, sleepy Sunday in November (when everyone else was indoors watching football) seemed appropriate. The artist is known for his desolate scenes that evoke a sense of loneliness and detachment, with a dramatic play of light and shadow. They feel a bit like stage sets — interesting, because some say Hopper’s paintings influenced filmmaker Alfred Hitchcock. These are not the jaunty “after” house portraits shown by the folks on the HGTV makeover shows. They are mysterious, and they draw you in: What’s going on behind those walls?

Sharing photos of the artist’s work as we stopped by the Hopper houses, Ohlson prompted the group to notice the differences between them. Although considered a realist painter, who worked in watercolors and oils, Hopper used artistic license to get the effect he wanted. And he was fond of cutting the tops off buildings in his work. “He gave us the worm’s-hole view — he was down, looking up,” Ohlson noted. Sometimes, he’d paint a fancier fence, or distort the perspective, or compress a scene. “He’d tinker with it to get the effect he wanted,” Ohlson said. One of our favorites wasn’t a house at all, but a watercolor of the roofs of buildings punctuated by a church steeple, called “Universalist Church.” The actual scene, reachable via a cemetery, looks remarkably the same as it did when Hopper painted it in 1926.

Even without a guide (using the “Hopper’s Houses” booklet they sell in the museum’s gift shop), you could pick out these homes. Some look remarkably unchanged, with just a missing awning or a difference fence, while others have the same facade but in different colors. “Gloucester Street,” painted in oil by Hopper in 1926, features an array of golden-hued rowhouses; today those homes are done up in cream, purple, and green. “What’s interesting is that he started with painting the grand old dames at first, and then became attracted to the neighborhoods like Portuguese Hill,” Ohlson says. “Eventually, he headed down to the railroad tracks and country cafes, looking for subject matter.”

During the 90-minute tour, Ohlson shared some of Hopper’s personal story. Pointing out the boarding house where Edward and Jo stayed in Gloucester, she noted that the two had a turbulent relationship, but were devoted to each other and died just a year apart. And although Nivison was a respected working artist when they met, “she became Hopper’s muse, and never really attained the recognition she might have had.” She encouraged him to try watercolor, and ultimately, the painting that put him on the map was a light-drenched watercolor, “The Mansard Roof,” in 1923. It is held by the Brooklyn Museum, but you can see the real thing in Gloucester, at 2 Clarendon St. “If it wasn’t for Gloucester, we might never have had Edward Hopper,” Ohlson declared.

After departing the tour, we were ready for beverage — and why not follow up Hopper with hops? Plus, we knew that the pub at Cape Ann Brewing Co. (www.capeannbrewing.com) had a waterfront deck, perfect for these dicey times. Admittedly, that deck — with views of the working harbor and piles of lobster traps — is a lot more inviting when it’s not 40 degrees outside, but still. So, we settled in at a table under a tall heat lamp and ordered a “Beer Named Sue,” a light ale brewed with locally harvested sumac. It was slightly tart, and crisp as a fall apple.

Since the pub is currently prohibited from serving drinks without food, we ordered some pulled pork tacos to share too, smoked onsite and served with slaw. Warm, hearty, and perfect. You could almost imagine Edward and Jo huddled at a nearby table, chatting about artsy stuff. Since this family-run business didn’t open until 2004, that didn’t happen. But our combo of art tour and brew pub — hops and Hopper — was a perfect pairing.