With these twins, differences lie in the details

GLOUCESTER — The two boys in this painting — Samuel and William Wonson — are twins who grew up on Cape Ann. Born in 1843, they were 3 or 4 years old when their portrait was painted by Moses B. Russell (1810-1884), a Boston artist best known for his miniatures. 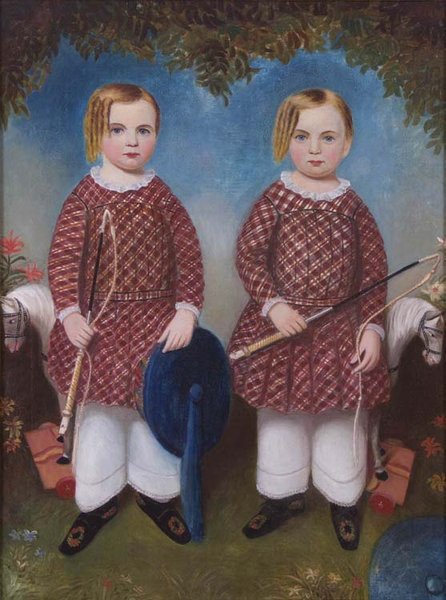 In fact, this is one of a very few full-size portraits Russell ever made. The enhanced scale was probably the result of a bit of extra money splashing around the Wonson household; but one likes to imagine it was because of a feeling that something larger was needed to match the personalities of the sitters.

I have no idea which one is Billy and which is Sam, but something in the eyes of the boy on the right, and the way his hands quietly caress the toy whip, suggest to me that he is about to unleash a bit of old-style, Victorian anarchy.

The light conceit behind the picture is that we are encountering the twins at play, but the whole image is in fact so conscientiously symmetrical that we are not really expected to believe this literally. Everything in it instead appears foreordained — like the heavenly innocence of childhood itself.

Notice the way the foliage creates a kind of double arch over their heads, leaving a halo of blue sky that gives their blue eyes an almost supernatural intensity. Toy ponies on wheels, meanwhile, protrude from behind their identical outfits at exactly the same angle.

Only a few things purposefully undermine the symmetry: One boy’s beret has been tossed to the floor, freeing his hand for the greater pleasure of the whip. And the flowers that further brighten an already vivid palette are different colors on either side. Thank goodness — they were not, after all, carbon copies of one another.

Both boys lived almost their entire lives on Cape Ann. Their paternal grandfather was the first lighthouse keeper at Eastern Point. William served in the Civil War with Company G of the Massachusetts 8th Infantry Regiment. Both men later worked on the Gloucester waterfront, at a time when the whole harbor was filled with fishing schooners.

Samuel married Belinda Friend in 1866 and had two children. His grandson, Roger Choate Wonson, 91, last year donated a daguerreotype of the twin boys and their sister, Ellen, to the marvelous Cape Ann Museum, where the painting has long been a popular favorite.