A stroll through Cape Ann Museum’s exhibition of John Sloan artwork is a walk back through time, when street cars ran down Gloucester’s Main Street and horse and buggy were a common form of transportation a century ago.

Although some of the canvases illustrate how much has changed, some scenes remain reminiscent of the city’s landscape today. 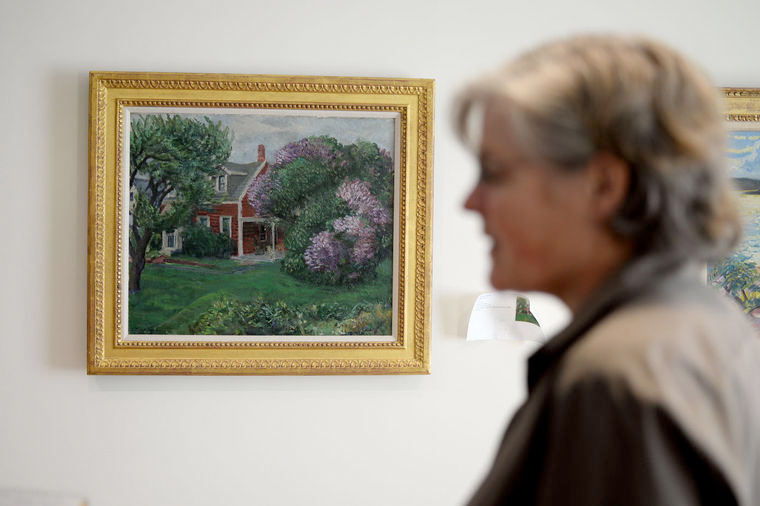 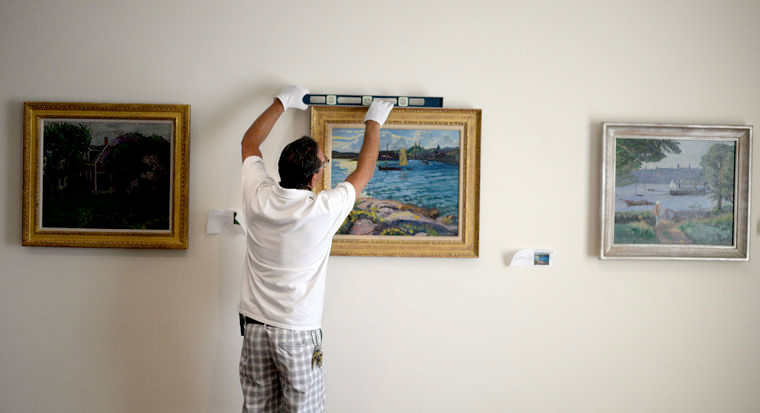 The special exhibition, “John Sloan — Gloucester Days,” which opens this Saturday, July 11, features 39 paintings, four owned by the museum. The rest are on loan from private collections and museums from Tacoma, Wash., to Brunswick, Maine.

Works by this prestigious painter sell upward of $2 million, some for as much as $3 million.

Karen Quinn, an art historian, applauded the Cape Ann Museum for organizing this show. She is senior curator at the New York State Museum at Albany.

“Sloan is very well known and important in the early 20th century pantheon of American painters,” Quinn said. “His palette exploded when he gets to Cape Ann and that’s what is so fascinating.”

Sloan (1871-1951) traveled to Cape Ann for five summers from 1914 to 1918.  The diverse scenes on his canvases include Dogtown — before it became a forest, when it looked more like rocky farmland — and distant views of Ten Pound Island in Gloucester Harbor when it was home to the U.S. fish hatchery for more than half a century.

Before Sloan made his first visit here, he earned a reputation for painting scenes of city life in New York City. Born in central Pennsylvania, he grew up in the urban environment of Philadelphia where he studied at the Pennsylvania Academy of the Fine Arts and worked as a sketch artist for local newspapers.

He moved to New York City in 1904 where he became part of “The Eight,” a group that “evolved into the better-known Ashcan School,” according to a press release.

At a time when many American artists were still painting in the Impressionist approach, Sloan and others began exploring new styles.

Of his new summer spot, Sloan said: “Gloucester afforded the first opportunity for continuous work in landscape, and I really made the most of it. Working from nature gives, I believe, the best means of advance in color and spontaneous design.”

The museum has had major exhibitions which included works by Sloan but this is the first exclusively featuring Sloan. A dozen museums and galleries across the country agreed to loan their works, including the Hood Museum of Art at Dartmouth College, Kraushaar Galleries in New York City, and Parrish Art Museum in New York.

“Everyone was receptive to this exhibition and were eager to lend,” Oaks said.

The show is hung chronologically, starting with his earliest landscapes, and moves into more work featuring architectural elements of the city. By 1916, Sloan had begun to look inward on the island of Cape Ann, painting the interior expanse of Dogtown, instead of the more popular seascapes.

“This is a perfect summer show staged at the very time Sloan came here,” said Ronda Faloon, the museum director. “These paintings are his experience of a Gloucester summer, starting when the lilacs bloom.”

Sloan first came to Gloucester when he was invited by artist Charles Allan Winter in 1914. They rented a little red cottage near Rocky Neck on East Main Street. The cottage, which still stands today, became a gathering spot for their friends, including painter Stuart Davis, another Ashcan artist, explained Oaks.

Just prior to this visit, Sloan was inspired by The Armory Show of 1913 in New York, said Carol Troyen, curator emerita of American Paintings at the Museum of Fine Arts in Boston.

“The Armory Show compelled him to rethink his style,” she said. “He took the lessons he learned at the show from the real avant garde, like Matisse and Picasso, and started painting in a whole new way. The Armory Show pushed him in a new direction but the Gloucester landscape and light enabled him to realize his goals.”

Troyen will give a lecture on July 23 about three renowned American artists who came to Gloucester in three successive decades, starting with Sloan, followed by Edward Hopper in the 1920s and Marsden Hartley in the 1930s.

She described how Sloan painted scenes that captured the heart of New York life from 1905 to 1913.

“He was a journalist artist, painting these city scenes in dark tones, and then he came to Gloucester and changed his stripes entirely,” Troyen said.

She noted that some of his scenes are even funny, in a warm way. One painting in the Cape Ann Museum show, a scene of some tourists coming to Gloucester on a summer day, captures that essence.

“He was an all-around good guy and a real community spirited guy,” Troyen said. “I think he was a person of tremendous compassion and it is apparent in his art, in his life, in his avocation.”

Troyen said there are a number of Sloan’s works in this exhibition that she has never seen and she is eager to view the show.

“It’s so important to have this appreciation of the artist in Gloucester as well as everywhere else. The Cape Ann Museum is such a jewel,” said Quinn, who served for 27 years as curator of paintings at the Museum of Fine Arts, Boston. She recently took a job at the New York State Museum as senior historian and curator, art and culture.

Gail McCarthy can be reached at 978-675-2706, or via email at gmccarthy@gloucestertimes.com.