Residents and visitors traveling over the A. Piatt Andrew Bridge along Route 128 have long sailed past two works of art at around 45 miles per hour.

Now, for the first time, the public can get a glimpse of a 20th-century Boston sculptor’s creations up close.

The works are actually two highly detailed bronze doors from the pylons on top of the bridge that spans the Annisquam River, carrying traffic to and from the island side of Gloucester and Rockport. They have undergone full restoration, and were brought back to Gloucester last week, when they were placed on exhibit at the Cape Ann Museum.

The doors were removed from the bridge late last year for needed conservation work, and this will be the first time in more than half a century that the public will be able to view the doors in a less daunting environment.

Boston sculptor John F. Paramino (1889-1956) designed the doors and oversaw their casting at the T. F. McGann & Sons foundry in Boston. Paramino’s public sculptures are installed across Boston, from The Founders Memorial on the Common (1930) to the World War II Memorial in the Fenway (1947-48).

To celebrate the arrival of the doors and allow everyone to inspect them close up, the museum will offer free admission to Cape Ann residents all day on Saturday, April 18 from 10 a.m. to 5 p.m.

Martha Oaks, the museum curator, said the doors will be at the museum until mid-November, after which they will be returned to their place on the bridge.

The museum provided a description of the two works: One door honors A. Piatt Andrew (1873–1936), founder of the American Ambulance Field Service in France during World War I, a U.S. congressman from this district, director of the U.S. Mint and a long-time Gloucester resident. The other door celebrates the history of Cape Ann, and in particular the fishing industry.

The sculptor was born in Boston to immigrant parents and studied modeling at the North Bennet Street School. He continued his studies under Augustus Saint-Gaudens and Bela Pratt and by 1916 had his own studio in Boston.

Robert Shure, the president of Skylight Studios Inc., which did the restoration, did not know at first the name of the sculptor because it was not apparent when the studio received the doors.

“When I first saw them, they were totally dark green-black because they were never cared for and you couldn’t see any of the detail,” he said. “After we did the cleaning and repatination, that is when I could see that these were really special works of art.

“They are beautiful pieces of work, especially the relief and the perspective,” he said. “On the fishermen panel, at the bottom, you see all the indigenous fish to the area. He dealt with a lot a historical themes in his work, as he did with the bridge doors.”

Shure, who is no stranger to Cape Ann and has close ties to many artists here, had never seen the doors.

“Who would ever have the opportunity to risk their life to go see them?” he said. “I drove over that bridge hundreds of time, and you are going 50 m.p.h. and you know there is something there, but I didn’t know anything about them.”

After the cleaning, he discovered the artist’s signature. It was dated 1950, the year the bridge was completed.

“This is one of his later works, and once I figured out who had made them, then I figured out that our studio had a connection with him because my two predecessors worked with him,” said Shure.

The art of removal

Removing the doors themselves was the first major challenge, with each weighing more than 300 pounds and located on a site high over a river.

“This was quite a process last November, and a bit of a rigging challenge, so we needed to work with the state and the contractors. They had to close the lane down so we could get the crane in there to hoist them out, and then strap them onto a flatbed truck,” said Shure.

Shure said that the doors were not functioning because the stones had settled and the locks were obsolete.

This project is a collaboration between the Massachusetts Department of Transportation, the City of Gloucester and the Gloucester Committee for the Arts, and the Cape Ann Museum.

Link to the article here. 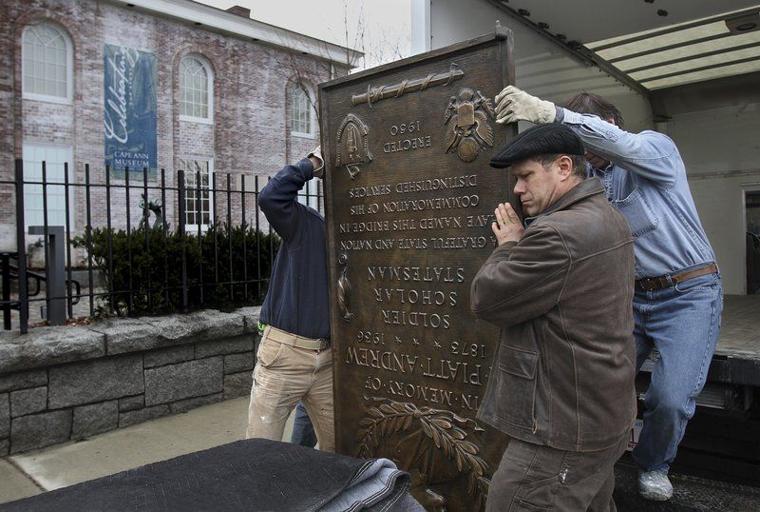 MIKE SPRINGER/Staff photoA crew from Skylight Studios, a Woburn-based sculpture company, unloads one of a pair of 300-pound bronze doors in front of the Cape Ann Museum in Gloucester on Thursday. The historic doors, designed by Boston sculptor John F. Paramino, were removed from the A. Piatt Andrew Bridge late last year for preservation work, and will be on display at the museum until mid-November, when they will be returned to the bridge.