The Need for Speed: Getting Fish to Market in the Late 19th Century 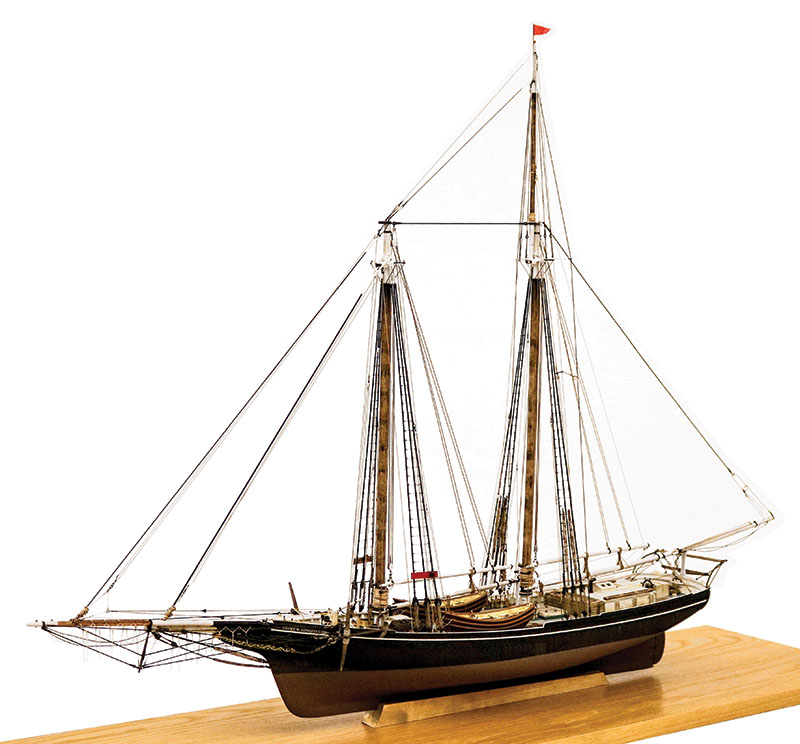 Two recent gifts to the Maritime and Fisher­ies Collection, a model of the schooner Sophronia and the “clipper schooner” Henry W. Longfellow will broaden the Museum’s presentation of the history and develop­ment of the Gloucester fishing schooner in the 19th century. The models were built by Willard E. Andrews and donated by Andrews and his wife, Linda, in memory of Kay Ellis of the Schooner Thomas E. Lannon. Their addi­tion brings the Museum’s collection of “fine scale“ models to about twenty.

In the 1840s, an expanding rail network allowed for faster transport of perishable goods from the east coast to inland com­munities as far away as Chicago. With the consequent rise in demand for fresh Atlantic seafood came the need for faster vessels. While the older types of fishing schooners— bankers and smacks—were able to deliver the catch for consumption soon after land­ing, these relatively slow vessels were unable to keep the fish fresh enough to last the inland rail journey. To increase speed, schoo­ners with sharper ends and larger sail plans were developed, able to sail swiftly to and from distant fishing grounds and return in short order with a full hold preserved on ice.

The first generation of fast schooners, called sharpshooters, began with the Romp, launched in Essex in 1847. While not as sharp as the Boston pilot schooners, they were far ahead of older fishing schoo­ners in hull form and rig. The schooner Sophronia, built at Essex in 1850, is a good example of this type. Andrews chose to equip his model of the Sophronia for the Georges Banks hand-line fishery. It is outfitted for hand-lining from the rails with hand-line gear in tubs, gurry pens on deck, and bait boards on top of the gurry pens and cabin. The rails are topped with “fishing rails,” in which are fitted “sogers” for snubbing taut fishing lines in a strong current.

Starting in the mid-1850s, as the demand for speed and hold capacity grew, a more substantial sharper hull form with a larger rig evolved. The new form, called a clipper, became the dominant fishing schooner type in the post-Civil War era. Carried to extremes in the 1870s, clippers were prone to capsize if driven too hard, leading to the loss of many vessels and crew members. As the clipper fell out of favor in the 1880s, newer, more stable schooner designs were called for.

Not entirely persuaded by recent design improvements, the East Gloucester firm of John Wonson & Co. commissioned Willard A. Burnham of Essex to build three identical clipper schooners to the same design (a half model carved by Burnham). The M. S. Ayer and the Belle Franklin, completed in 1882, and the Henry W. Longfellow, completed in 1883, all fished successfully into the 20th century. Photographs indicate that the Ayer specialized in hand-lining, the Franklin in mackerel seining and the Long­fellow in dory trawling.

Andrews’ model of the Henry W. Longfellow is fitted out with six dories and their trawl gear, a gurry kid and bait boards. A pair of davits at the stern (based on a contemporary photograph) indicates that this schooner went hand-lining at times, and would then have carried a dory or yawl boat similar to the one carried by Sophronia.

The Museum is grateful to Willard E. and Linda Andrews for their gen­erosity and ongoing, enthusias­tic support of the Museum and its maritime and fisheries collections.