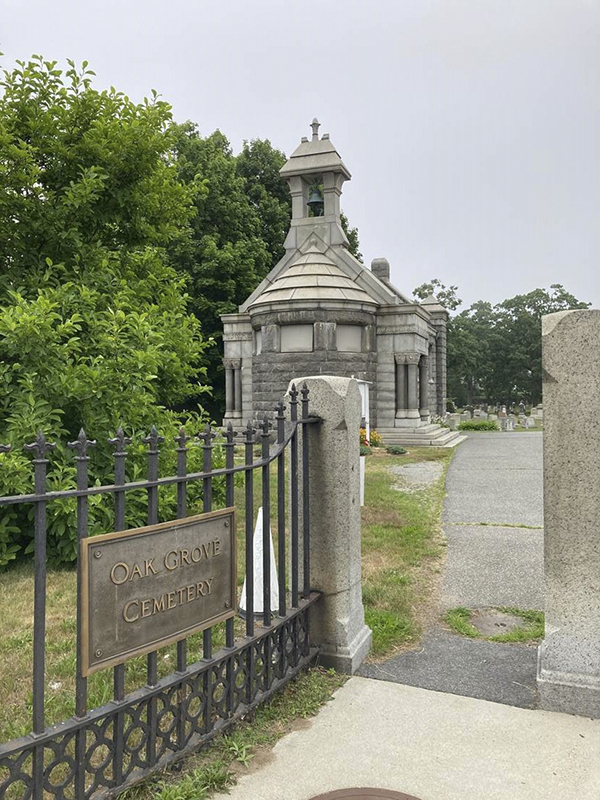 Entrance to Oak Grove Cemetery with a view of the Bradford Chapel.

Oak Grove Cemetery, located at 177 Washington Street in Gloucester, MA, was designed in 1854 by landscape architects R. M. Copeland and H. W. S. Cleveland and consecrated the following year. The 11-acre site, envisioned as a place for the living to enjoy, features a Romanesque inspired granite chapel at the entrance and footpaths that wind through the property. Among its many inhabitants, it is the final resting place for four musicians: John Jay Watson (aka "the Fiddlin’ Fisherman"); Denmark Procter Jr., Emma Abbott Wetherell and George B. Stevens. 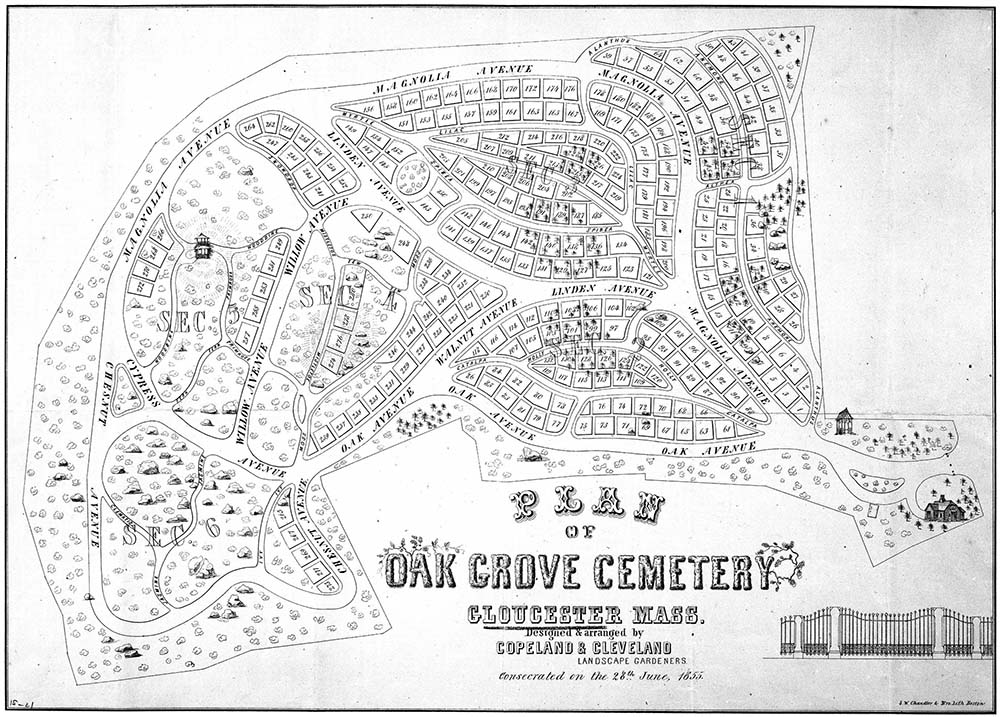 John Jay Watson, the Fiddlin’ Fisherman, was born in Gloucester in 1830, rose to musical fame in New York City during the 1870s and was buried in the northeast corner of Oak Grove Cemetery in 1902. Watson, like many of his generation, went to sea at a young age (8 years). When he was 14, he signed on to the Gloucester fishing schooner Garland. It was on the Garland that Watson fell in love with the fiddle, an instrument a fellow crew member had brought on board. After a couple more fishing trips, Watson was able to buy the fiddle from his shipmate and was soon learning to play it. 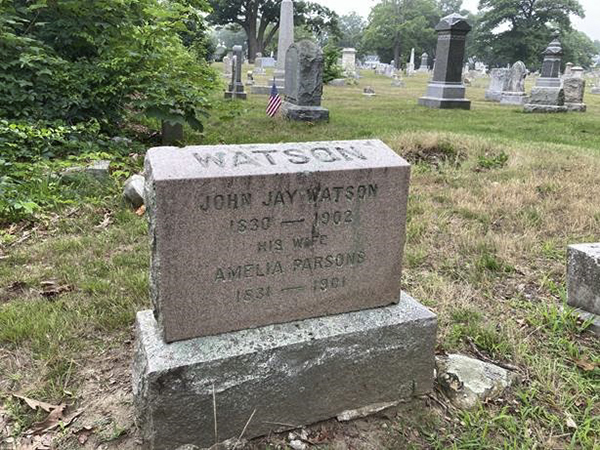 While Gloucester was a big fishing port, it was also still a small town, and in 1850 John Jay Watson was able to land a berth on the fishing schooner Rival that worked out of Truro. The entire crew of the vessel were musicians and took a variety of instruments with them on each trip. As luck would have it, the Rival ran aground on Prince Edward Island during the Yankee Gale of October 3, 1851. Thankfully, the crew were able to salvage their instruments. While their shipmates returned home quickly on other vessels in the area, Watson and the skipper of the Rival, decided to work their way home across land, sensing that they could earn a little money giving concerts along the way. Their instincts were right and by the time he reached Gloucester, John Jay Watson’s musical career was launched.

Watson spent three seasons in Europe absorbing all he could about music and by 1860 was married, living in New York City and teaching music. By the 1870s, his compositions were being published in sheet music form and included such works as Happy New Year Waltz (1874), Merry Christmas Waltz (1875) and The Frog’s Moonlight Serenade, introducing the Celebrated Frolic of the Frogs Waltz (1893). The Fishermen’s Memorial and Record Book, published in Gloucester in 1873, included a colorful retelling of the Fiddlin’ Fisherman’s rise to stardom. Despite his success, Watson never forgot where he came from and chose to be buried back in his hometown. 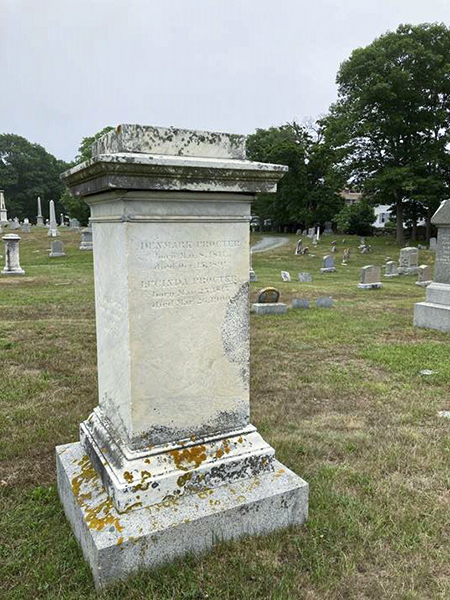 Buried in the same northeast corner of Oak Grove as John Jay Watson is Denmark Procter Jr., another musician who enjoyed a large and loyal band of followers but who, unlike Watson, never traveled far from home. Denmark was born in Gloucester in 1811 and inherited a love of music from his father. He also inherited many of his father’s song books which are now preserved at the Cape Ann Museum. As a young man, Denmark learned the skills of furniture making and upholstery. While he would eventually turn to music, his talents with needle and thread were good enough to earn him a prize of $1 from the Essex Agricultural Society in 1860 for a counterpane (bedspread) he made.

In addition to the song books Denmark inherited a violin that had once belonged to his father, which, according to a label on the instrument, was made in London in 1768 by Charles and Samuel Thompson in St. Paul’s Churchyard. By 1860, Denmark was focusing more on his music and was reputed to possess a “genial, kindly nature … (and) rare musical abilities.” For many years he conducted dance classes “which were very popular on account of their sociable nature.” Shortly before he passed away in 1891, Denmark Procter Jr. and his wife Lucinda celebrated their 50th wedding anniversary. At the gathering Denmark was persuaded to pull out his old-time violin and the carpets were soon rolled up for a festive contra dance in the Procter’s front parlor. 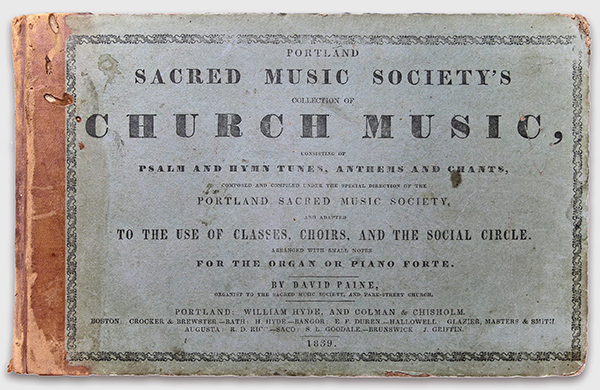 The same year Denmark Procter, Jr. passed away so did Emma Abbott Wetherell, a well-known opera singer whose final resting spot is marked by the largest and most elaborate monument in Oak Grove. Abbott was born in Chicago in 1850; her musical talents were recognized early and by age 20 she had already given her début recital in New York City and was on her way to Paris to study voice. In 1876, she married Eugene Wetherell who was from Gloucester and he became her business manager. For 15 years the pair toured the United States. Emma and her troupe always performed in English and the crowds she drew were large and admiring, as when she performed in H.M.S. Pinafore in Houston and Galveston in 1880. 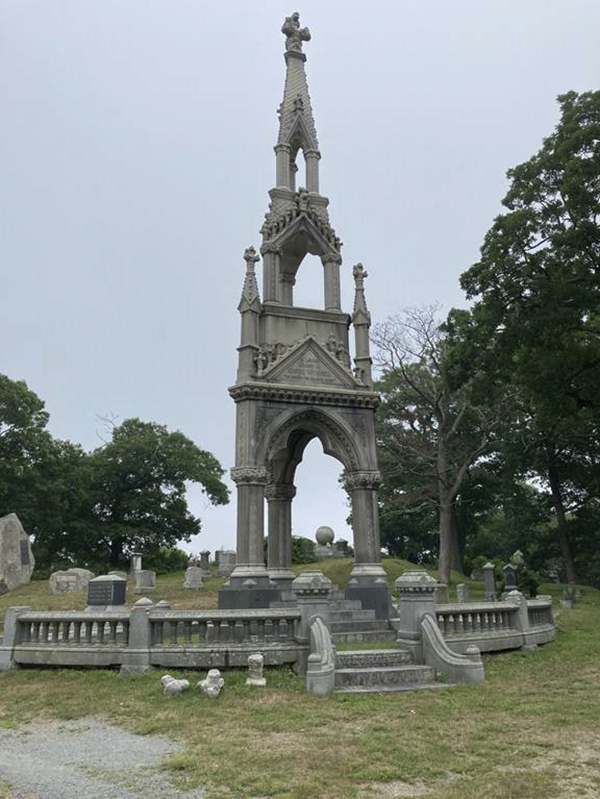 In 1889, Eugene Wetherell died and was buried in Gloucester. After she had recovered from grieving, Emma decided that she would rather have her late husband buried in New York where they had spent their married life. Her mother-in-law, who lived in Gloucester, insisted that Eugene not be moved and Emma was forced to relent. Realizing that she too would eventually be laid to rest in Gloucester, Emma spent a year studying designs and plans for a suitable monument to be put in place in Oak Grove. The result is a 60-foot-high granite edifice that towers over all the other graves in the northern quadrant of the cemetery. The multi-tiered structure incorporates motifs that were special to Emma and Eugene, many of which have musical significance. One of her principal inspirations for the design was said to be the Duomo di Milano, a cathedral in Milan, Italy.

After taking in Emma Abbott’s memorial, that of George B. Stevens (1865-1940) will seem very modest. Stevens is buried in the Stevens family plot, the same plot where artist Fitz Henry Lane was laid to rest. Stevens was a son of Lane’s great patron, Joseph L. Stevens, Jr. and was a well-known and much-admired musician in Gloucester. 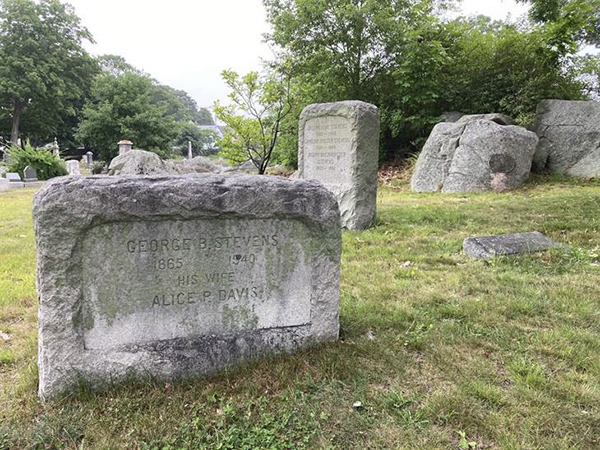 Stevens was born in Gloucester and went on to study music at Harvard, graduating in 1886. He began his musical career playing the organ at the University’s Divinity School. After spending a couple of years teaching music at Wells College, Professor Stevens returned to Gloucester and began teaching here. He continued playing the organ, most notably at the Gloucester Universalist Church and when the carillons were installed atop Our Lady of Good Voyage Church in 1922, he was the first one to play them.  Stevens was very civic minded and was actively engaged in Gloucester’s 300th Anniversary celebrations during the summer of 1923. He conducted a community sing-along which featured the 50-piece Waino Band from Gloucester’s Lanesville neighborhood and included such classics as America the Beautiful, Finlandia and My Bonnie Lies Over the Ocean.

Stevens’ passions extended beyond music to encompass literature and for many years he was an active supporter of the Sawyer Free Library. He also organized a group at Gloucester High School called the Stevens Book Reviewers. Not surprisingly, Professor Stevens was also involved at the old Cape Ann Scientific, Literary & Historical Association (now the Cape Ann Museum) and when he passed away in 1940, the organization remembered him as “a man of talents and scholarly attainments who used his accomplishments for the public good and especially in his native city.”