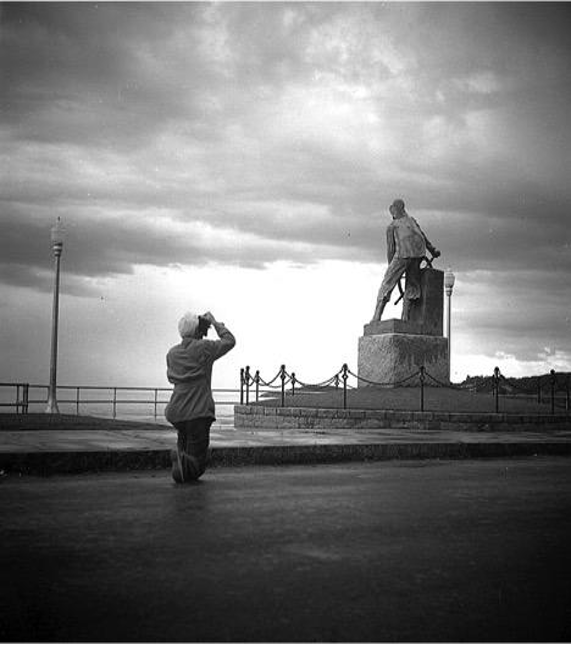 During the early 20th century, the only opportunity most traditional sculptors had to incorporate color into their work was to decide between a green or brown patina. Perhaps that’s why Leonard Craske, who is best known for his 1923 Gloucester Fisherman’s Memorial (known as the Man at the Wheel), turned toward the medium of photography as a means to explore color.

Color photography was still relatively new and expensive when Craske began experimenting with it in the early 1930s. He used Agfa Plates, Germany’s answer to France’s Autochrome. The French process pioneered the use of thin color screens made from a transparent mosaic of dyed potato starch. The green, red and violet starch grains were mounted to glass and would organize incoming light during exposure, resulting in a positive color plate. The Agfa Plate had an improved distribution of dyed particles, resulting in less clumping and a consequently sharper image.

Craske was an enthusiastic proponent of the medium and made hundreds of Agfa Plates over the course of the 1930s. By 1940 he’d given over a dozen lectures on the subject in Gloucester alone, speaking to groups like the Gloucester Society of Artists, the Mothers Club and the Eastern Point Yacht Club. Presentations often began with a technical explanation which was followed by a lecture accompanied by 120-150 color slides. In 1938 Cape Ann Camera Club invited him to critique its member’s work.

His subject matter was often local: dramatic sunsets over the harbor, the foggy moors of East Gloucester, sundrenched beaches, rose gardens and ponds with waterlilies, all in living color. True to the spirit of the sculpture for which he is remembered, he also took photographs of fishermen, trawling and gillnetting. Occasionally audiences would also enjoy a “magic carpet journey” to far away locales. In 1937 he presented a series of photographs taken in Haiti to a capacity crowd at the Hawthorne Inn, and in 1939 he documented 500 miles of the Nile River in a lecture titled “The Nile: From Cairo to the Great Dam of Aswam.” Craske hoped his photographs would inspire his audience to become more conscious of the color and beauty of the landscape around them, a mission that would have proven difficult with sculpture alone.