Journal of the Keepers of the Light at Annisquam Lighthouse

Most, but not all of us, have never been a lighthouse keeper. Because of that, it may be hard to imagine what the day-to-day work and lifestyle was like. The job description included: trimming wicks, refilling oil at all hours (hence “burning the midnight oil”), maintaining the station and grounds, paying close attention to the weather, and in extreme cases, assisting in rescues. Enough to keep a keeper busy at all hours of the day, right? But how can we know? Lighthouses became almost completely automated by the 1960s and specific knowledge of the work these keepers did has grown scarce and can sometimes be generalized. Luckily, the Cape Ann Museum Library & Archives holds an extremely detailed journal, Keepers of the Light at Annisquam Lighthouse, covering the years 1872 through 1888. 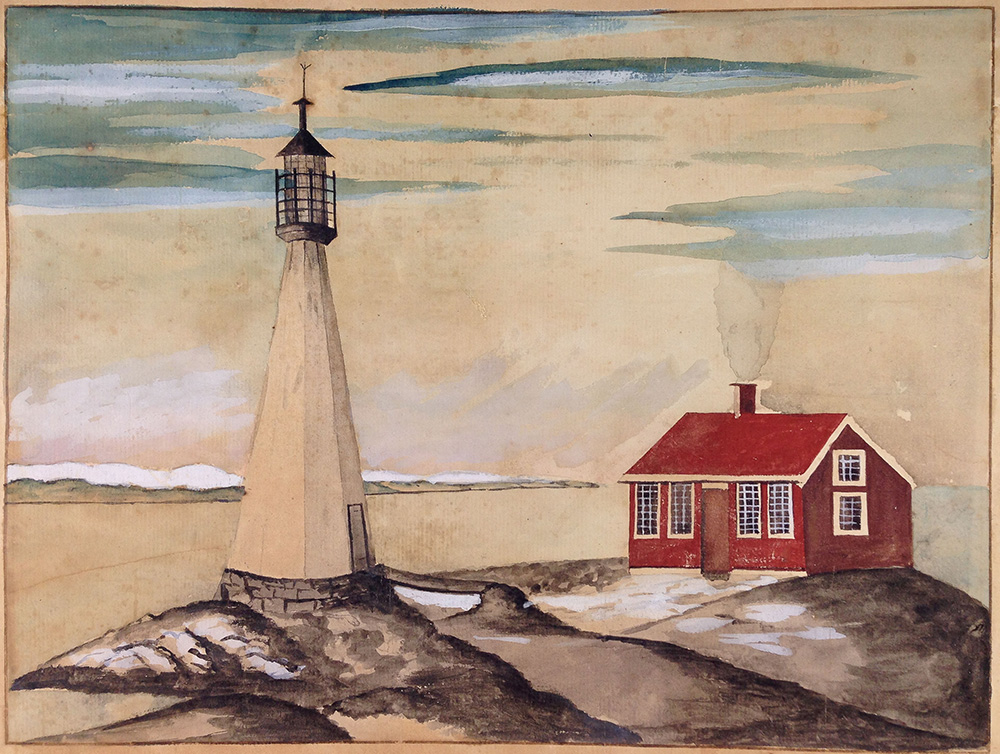 The history of a station at Annisquam dates back to 1800/01, making it one of the oldest in Massachusetts. That first wooden structure at this location lasted almost 56 years before being partially replaced and re-fitted in 1856, which would keep it standing until its replacement in 1897. That brick lighthouse still exists today, having stood for over 123 years now. It’s important to note that the original keeper’s house (also built in 1800/01) remains as well, thanks in part to numerous restoration and preservation projects.

It is the second re-fitted structure, the 40-foot octagonal wooden tower, where our journal takes us. For timely weather and seasonal comparisons, we’ll be looking at journal entries for the date of November 19 over a period 17 years.

The journal, Keepers of the Light at Annisquam Lighthouse, was originally authored by A. G. Moore from January 1 to August 31, 1872. It’s likely that he authored previous journals, but those are lost to time—or at least are not present in the Museum’s collection! Because Moore’s entries don’t fall on our chosen date of November 19, we’ll instead turn our attention to this journal’s primary "keeper," Dennison Hooper.

Dennison Hooper had military experience during the American Civil War, being a private in the 35th Massachusetts Regiment, Infantry Company F. Upon returning home from the War, he and his wife settled in Annisquam where he took on various occupations: teamster, laborer, milk peddler, and of particular interest to us, lighthouse keeper. 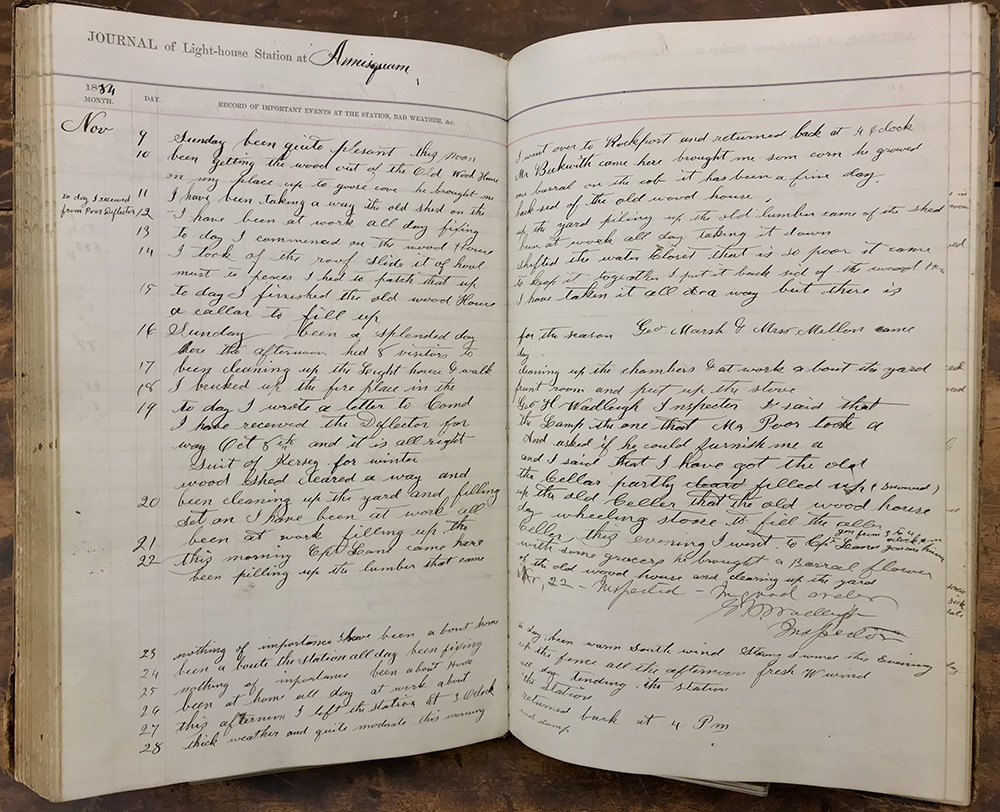 Most of Hooper’s early entries began, as one would expect, with the weather:

Rather an uneventful day!

Fast forward one year and we have one of the very few instances in the entire journal where Hooper misses or skips a day! Did he know that 147 years later we would be releasing this post about all November 19ths and be puzzled that he omitted a day?!

With this entry, we see evidence of Hooper’s preparations for winter.

1876: "2 visitors to day / nothing of importance today" — Seemingly visitors were not that unusual.

1881: "Strong NE rain storm / I went to Gloucester this morn and fixed up with Joshua Stuart"

This entry brings up a luxury that not all keepers were afforded: the ability to leave! Since the Annisquam light has always been landlocked, the capacity for Hooper to easily go in and out of town allowed for Hooper to get "fixed up" this rainy November day.

1882: "Set in cloudy / at noon cleared off / quite pleasant but fresh breeze / the folks all gon a away"

1883: "I received a gold watch from Charleston S.C. from Rufus by mail / it has been a pleasant day / this afternoon I went down to Lanesville saw Mr. Emery & Mrs. Moor / I got 6 roles of paper for 12 cents a role"

One can’t help but take notice of the short shrift given to the gift of a gold watch!

1884: "To day I wrote a letter to Comd .Geo H. Wadleigh Inspector / I said that I have received the Deflector for the Lamp / the one that Mr. Poor took a way Oct. 8th and it is all right / And asked if he could furnish me a suit of Kersey for winter and I said that I have got the old wood shed cleared a way and the Cellar partly cleared filled up (snowed)."

There’s a lot to unpack in this comparatively wordy entry: First, Commander George H. Wadleigh was indeed Lighthouse inspector for this region, having been appointed just one year prior. With an extensive military career during the American Civil War, Wadleigh’s time ashore as inspector was short lived (three years on the dot) as he returned to duty during the Spanish-American War.

Second: A look back to October 8 does indeed show that Mr. Poor (“lampest”) came and set one panel of glass in the lantern.

Third: What’s a kersey, you may ask? A kersey (with thanks to Messieurs Mirriam and Webster) is “a [coarse] heavy wool or wool and cotton fabric used especially for uniforms and coats” dating back to the 13th century, Medieval England; indeed, important for chilly New England winters. And aptly asked for, as the final line of today’s entry reads "snowed."

1885: "this morning cloudy and sprinkled a little"

1887: "I have been burring stone in the yard / the stone that I blasted out when I laid the pipe from the well to the house and graid of the yard, been thick and rainy good part of the day"

And that’s how Dennison Hooper’s last November 19th entry leaves us. With a look at the hard, physical labor that it took to be a "keeper of the light," from cows, to visitors, to trips to town, gifts of watches, requests for kersey, and a whole lot of rain and snow, this journal offers a unique window into the life of a lighthouse keeper. To find out what Hooper was doing during the remaining 5,952 days of his tenure, contact the CAM Library & Archives.

Elliot C. Rogers, writer for the Gloucester Daily Times, and donor of this journal to the Cape Ann Museum, wrote: “A remarkable book in Keeper Hooper’s hand, a record of his work and daily life for many years” then further, “A fine record of a good Cape Ann Citizen.”

Here in the Library, we couldn’t agree more.