The Influenza Epidemic of 1918

In the fall of 1918, as World War I was ending, influenza swept around the world and across the United States. The first reported cases in Boston were in early September and within four days the first death from the disease had occurred in Gloucester. Within two weeks, 82 individuals in Gloucester had died. While the epidemic would largely run its course by the end of the year, estimates are that it infected nearly 4,000 Cape Ann residents and took the lives of more than 250. The outbreak had lasting effects on the community and the course of daily life; it also severely tested the resilience of the people of Cape Ann. 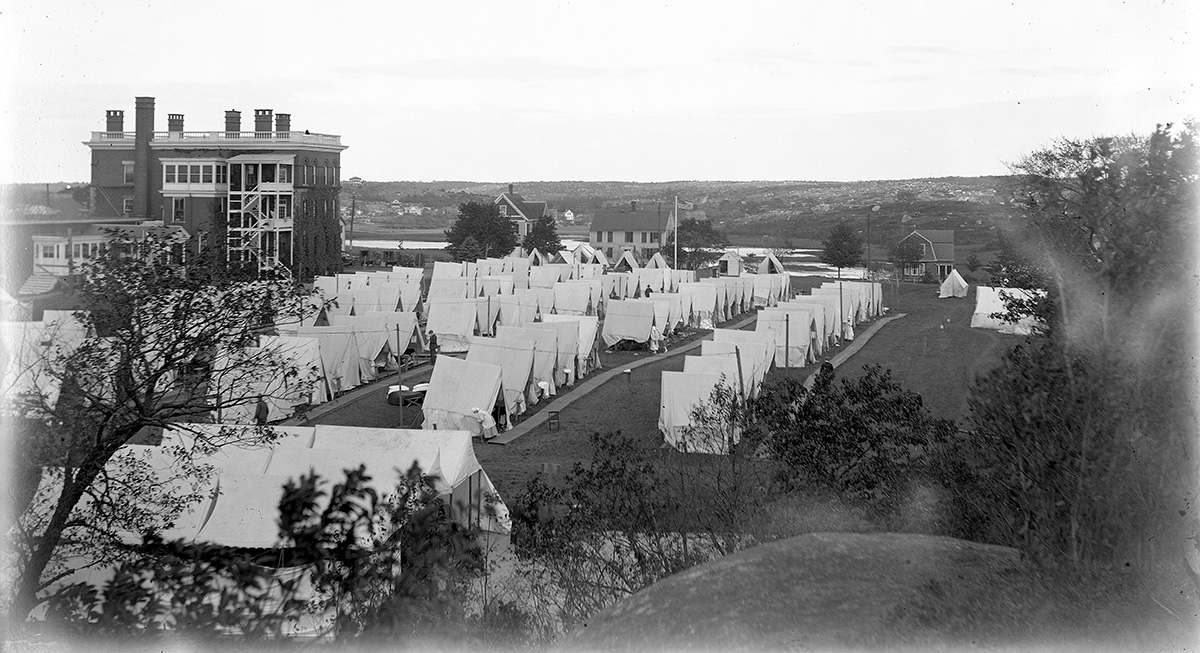 Photographer Frank Robinson shot this picture of the “tent hospital” set up outside the Addison Gilbert Hospital in September 1918. The photograph was donated to the Museum by Harry Merchant in 2010.

Photographs in the archives of the Cape Ann Museum show the “tent hospital” that was set up on the grounds of Gloucester’s Addison Gilbert Hospital during September 1918 in response to the epidemic. At that time, the Addison Gilbert had just 30 beds and was unable to meet the demands for medical care brought on by the disease. The outdoor hospital was overseen by the U.S. Army Medical Corps; it was one of eight such operations in Massachusetts, subscribing to the belief that “open air treatment” of influenza could be highly effective. To help staff the Gloucester facility, nurses were brought in from Canada. The Gloucester District Nursing Association, organized in 1914, did their part. While the Gloucester outdoor operation was praised by the surgeon general of the State Guard for its good work, as Lydia Florence Griffin, head of the District Nurses observed, the situation was dire:

"We are now in the midst of this terrible epidemic. The whole city is stricken, no help is available from the other cities, and as one of our nurses is also ill with it, it leaves Miss Thomas and Miss Riley to do it all. I called for volunteers who had taken the nursing course, and only one was willing to report for duty this afternoon. The situation is critical, the hospitals are filled, the doctors are ill, and the District Nursing Association and the few nurses and doctors worked in relays. No call went unheeded. As Gloucester was the first to be stricken, we were taken quite unawares. But I feel we were not found wanting."

Almost as quickly as it arrived, the epidemic subsided. By mid-October, reports were that the “danger period (had) nearly past.” In March 1919, just 27 cases were reported and by April 1919 there were no new cases. The entire community was severely tested by the epidemic and took much away from it in terms of public health. A hospital was set up on Essex Avenue dedicated to the treatment of contagious diseases. Although Braewood Hospital, as it was known, was only in operation for a few years, in establishing it city officials acknowledged the importance of such a facility were an epidemic to strike again. The city also created a position for a school nurse, to work in tandem with the school physician. A nurse was appointed to the position in February 1920 and made over 680 home visits during the ensuing school year. The Gloucester District Nursing Association served its community heroically during the 1918 epidemic and continued to do so over the next century. 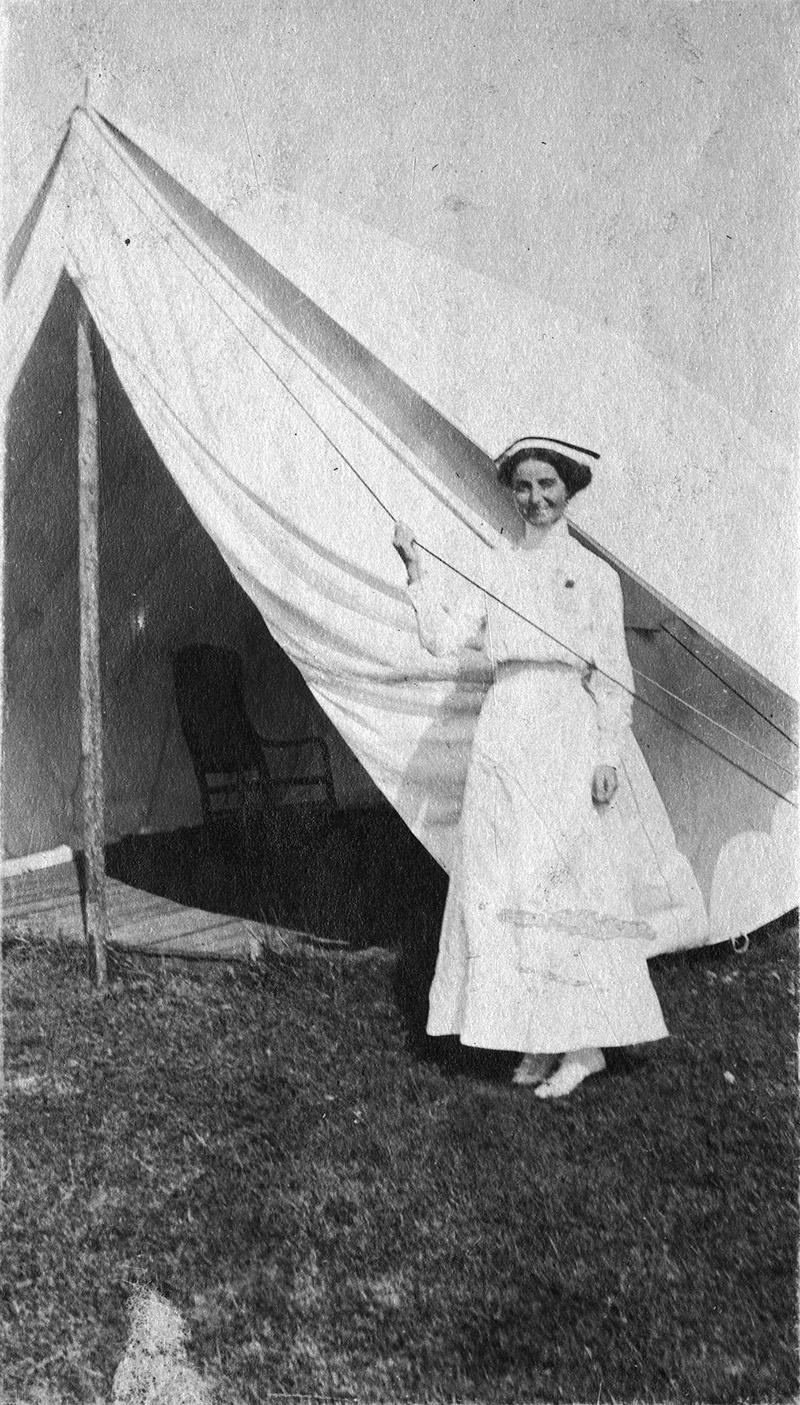 Margaret Ryan Bernard (1889-1958) was a graduate of the Addison Gilbert Hospital School of Nursing and is shown here in front of one of the tents erected on the grounds of the Hospital during the 1918 influenza epidemic. This photograph was donated to the Museum by Margaret’s daughter, Terry Hutchinson in 2012. 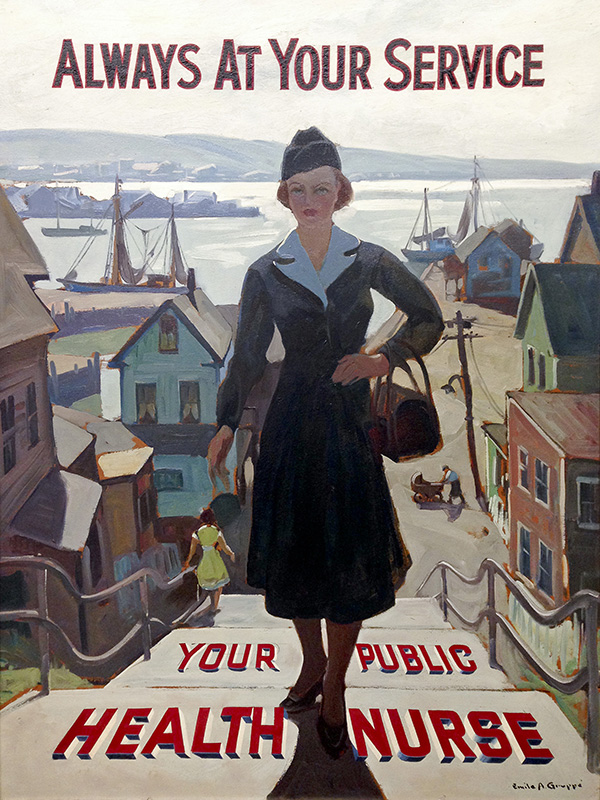 This painting by Emile A. Gruppe (1896-1978) is owned by VNA Care and is currently on deposit at the Cape Ann Museum. It shows a thoroughly competent young nurse, ready to serve her community, standing at the top of the stairway that joins Friend and Main Streets. 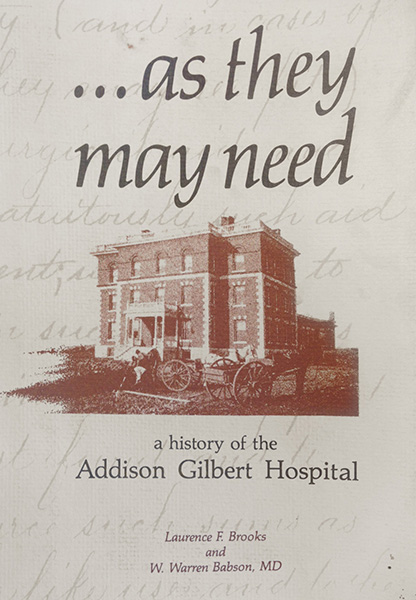 To learn more about the history of the Addison Gilbert Hospital, check out As They May Need, a history of the Hospital written by Laurence F. Brooks and W. Warren Babson, published in 1989.