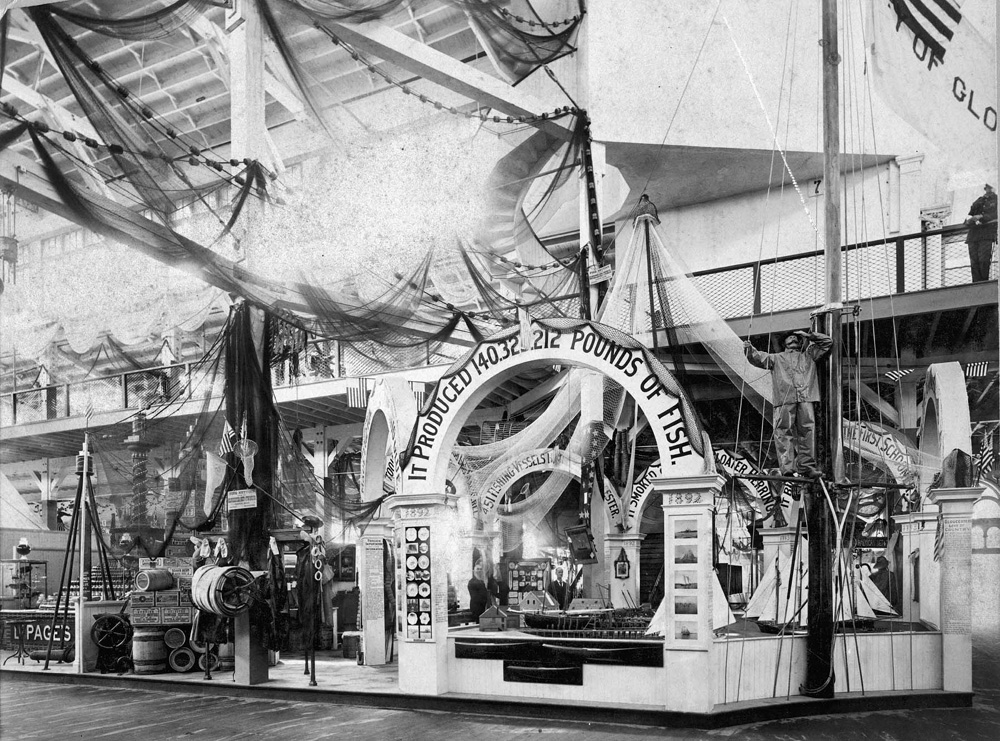 Proud of their history and accomplishments in the fisheries, the people of Gloucester spared no expense in organizing a display for the 1893 Columbian Exposition in Chicago, the World’s Fair. Encircled by six tall arches, draped with a canopy of fishing net, the installation included more than 1,200 objects and showcased the ingenuity and productivity of all of Cape Ann. The central feature of the display was a scale model depicting a section of Gloucester’s waterfront as it looked in the early 1890s, complete with schooners, shore side buildings and wharves and a marine railway where vessels were hauled out for repairs. What remains of that installation is on permanent display at the Cape Ann Museum. 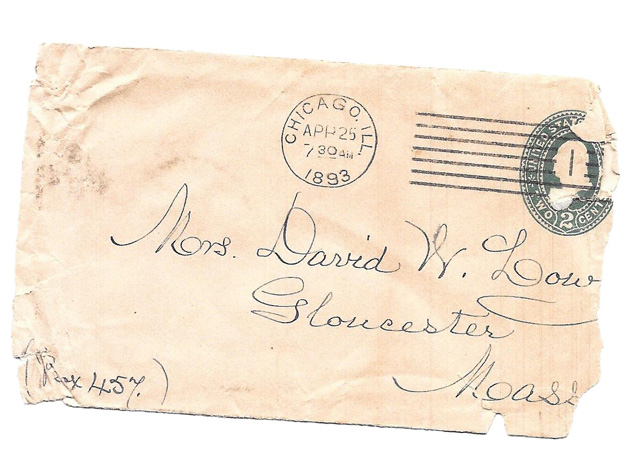 David Low of Gloucester, a land surveyor, veteran of the Civil War and civic leader on Cape Ann, was in charge of assembling the diorama and transporting it to Chicago. It took two railroad freight cars to carry the exhibit and over a month to complete final installation. During that time, Low wrote a series of letters home to his family in Gloucester, providing a first-hand account of the excitement surrounding the Fair. Those letters are preserved in the archives of the Cape Ann Museum. 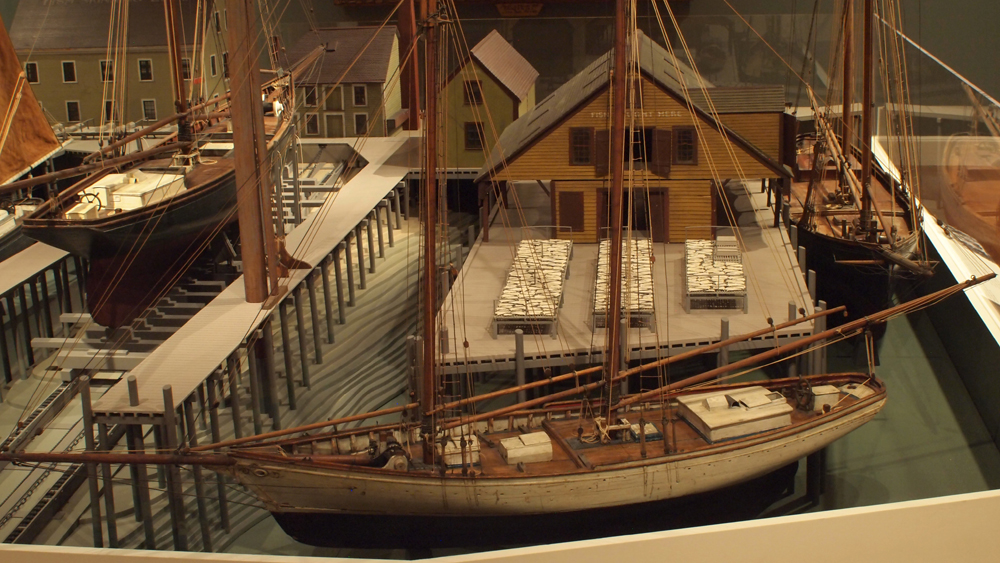 The central feature of the Gloucester Harbor Diorama was a scale model of a section of the Gloucester waterfront. The display was encircled by six arches, which were draped with a canopy of fishing net and gear. [photo here] The models included both vessels and buildings, and all of the surviving models are incorporated in this diorama.  There are four vessels: the Harry L. Belden, the Lottie S. Haskins, the Puritan and the Nannie C. Bohlin. The buildings include a skinning loft, a smokehouse, a wharf shed, and a caulkers' and shipwrights' shed. The flakes, used for drying salted fish,  and the marine railways have been constructed for this diorama to replace lost elements of the original display. Taken together, the models in this diorama are an authentic representation of Gloucester's waterfront and fleet as they existed more than a century ago when Gloucester was the world's most renowned fishing port. 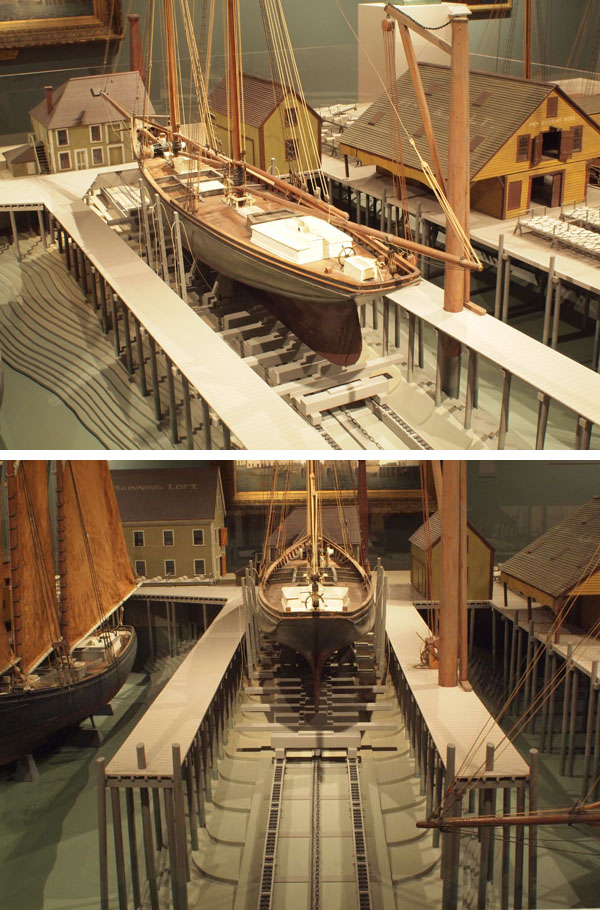 A marine railway is a service facility for hauling ships out of the water to repair and clean the hulls. They are not used for shipbuilding, although some of the work done on them may call for the services of skilled ship carpenters. Three marine railways were active in Gloucester Harbor in 1892: Burnham’s railway and Parkhurst’s railway, both at the head of Duncan Point, and the Rocky Neck Marine Railway. Each had two hauling ways. All six ways were kept busy except in the worst of weather and economic situations. Rocky Neck Marine Railway is still active. The Parkhurst railway was filled and is now the site of the Gloucester Coast Guard Station. Burnham’s Railway is preserved as a historic site, part of Historic Gloucester, a nonprofit educational organization.

Since 1849, steam engines powered the marine railways in Gloucester and were not replaced by gasoline or diesel engines until the 1920s or ‘30s. The ground level was occupied by a steam boiler, engine, reduction gear, and capstan. On one side of the foundation is a large roofed coal bin. On the opposite side is the smoke stack and a wooden steam box for the steam-bending of replacement planking for vessels under repair.

Parts of the Marine Railway

Hauling ways: A straight, gently-inclined slope to convey a ship from deep water to dry ground.

Cradle: A wooden frame with iron rails on its underside that corresponded to those on the rail bed timbers. Its dual purpose was to raise the ship by traversing the racks and to support the hull safely while the repair crews were at work.

Caulkers' and shipwrights' shed: Caulking a ship—driving rope yarns called “oakum” into the plank seams to make them watertight—was the most important aspect of its maintenance. At every marine railway and shipyard a small shed was reserved for the caulkers where they could store their tools and caulking materials. This shed was shared with shipwrights who were often called upon to repair rotten or damaged planks and frames in older vessels. The shipwrights' section of the building was used to store tools and hardware such as spikes, bolts and custom hardware furnished by blacksmiths.

Finger Piers: Long finger piers were needed to protect the hauling ways and for the railway crews to monitor progress as a vessel was being hauled out.

Mast Crane: The wooden mast crane swiveled on a large post which was driven into the mud down to bedrock. Since the crane could not “travel,” the vessel had to be moved until the mast partners were under the crane. A completed mast was fitted with a heavy rope sling at its balance point, hooked to the crane tackle, raised, and swung over the vessel. The mast was then tipped, the heel led down through the partners and onto the step mortise in the keelson.

When new, the Nannie C. Bohlin was one of the largest schooners in the Gloucester fishing fleet. A fast, powerful sailer, she was built for the halibut fishery. In 1892, the Bohlin sailed in the Great Fisherman’s Race, placing second to the Harry L. Belden in the large schooner’s division.

Among the smaller fishing schooners of the 1890s, the Lottie S. Haskins was regarded as one of the fastest and most responsive to skillful handling under sail. She raced with other small schooners in the Great Fishermen’s Race of 1892 and won the trophy for that division. 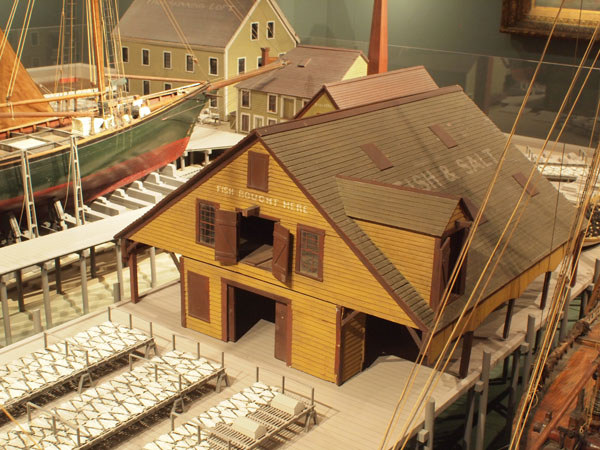 By the late 1860s, fish wharves dominated the Gloucester waterfront, lining the shore wherever the harbor bottom was deep enough to allow fishing vessels to approach them. Some fish wharves were “company wharves”; others were owned by individuals, by families, or by partnerships and used to service their vessels or leased to other vessel owners. Wharves weren’t just used to unload fish. The sheds built on them were for drying and storing vessel gear and for processing salt fish for drying or smoking. The open spaces on the wharves were filled with “fish flakes”—the ubiquitous drying racks. Wooden wharves were built on pilings, or “spiles,” driven into the bottom down to the bedrock (or deep into hardpan), spaced ten feet apart in rows. On the sides of the wharf where vessels were tied up, “fender spiles” were driven outboard of the wharf spiles to prevent damage to the wharf structure.

Uses for this typical wharf building with a two-story enclosed center with open-air storage space under the eaves varied with the type of fish being handled. When salt codfish were landed, they were packed in salt in large butts (hogsheads) and stored inside until needed. When an order was placed, the salt fish were pressed to remove excess water, then spread out to dry on the flakes. The sheltered areas under the eaves were used as temporary storage. 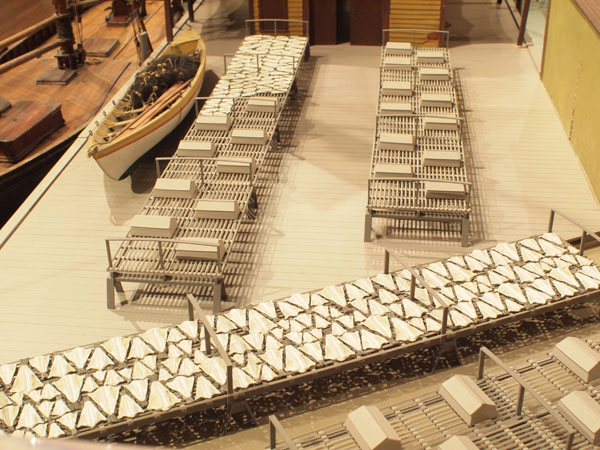 Salt fish of any kind was dried on “flakes” – wooden racks which, in the 1890s, measured 8 ft. wide by 14 ft. long and raised about 2 ft. off the ground. A flake yard could be a wharf or level plot of ground, or even the low-pitched roof of a building, where the flakes could be set out in rows. Most flakes rested on wooden horses. The drying time for salt fish could vary from a few hours to more than a week, depending on the type of fish and the weather. The cool, dry autumn weather made the best months for drying, and fish prepared at this time was regarded as the best quality and fetched the highest prices.

The Harry L. Belden was successful in both the banks fisheries and the mackerel fishery. This model shows her equipped for mackerel seining; her seine boat lies on the adjacent pier. The Harry L. Belden is best remembered for her victory in the Great Fishermen’s Race of 1892, also known as “The Race It Blew.” Having no time to unload a large fare of mackerel before race day, her cargo was just right to stand up to the gale with all sail. The large silver trophy she won is on exhibit in the Maritime and Fisheries gallery. 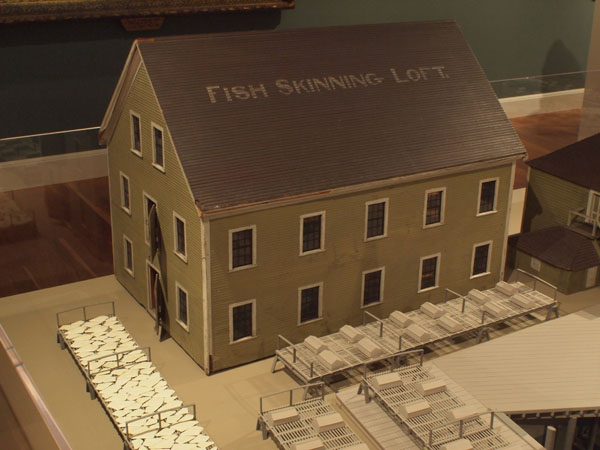 Boneless salt codfish, “packed for the trade,” was developed in the 1870s to market dried salt fish in small containers, usually wooden boxes. This was more convenient for selling in grocery stores than whole fish, which were shipped in bulk and sold by the piece. After the salt fish were dried, they were taken off the flakes, bundled, and carted off to the packing house. Inside, they were skinned, boned and cut to size, then packed in boxes. Employees worked standing-up at long benches, some assigned to specialized tasks (such as boning), while others worked at several tasks in sequence (such as cutting, pressing and packaging).With the introduction of fish packing houses, fish processing went from being a cottage industry to corporate enterprise. Work methods and working conditions were radically changed, not all for the better, and for the first time in the fishing industry, women were employed in large numbers.

Halibut could be smoked only after it had been salted, but not quite as thoroughly salted as codfish. Smoke houses in Gloucester were divided into compartments with grating floors and a pair of wooden doors for each compartment (at opposite sides) to control ventilation. Oak chips or sawdust was the principal fuel, placed in small piles in the basement. Most of the smoke houses in Gloucester were located at the Head of the Harbor, on a point of land appropriately called “Smoky Point.” This area was buried by fill when the State Fish Pier was constructed.

This model is a rare representation of a late “Georgesman,” or “Georges Banker” – a schooner for fishing “from the rails” (the crew on deck), rather than from dories. This was the oldest method of fishing on Georges and the Grand Banks, dating from colonial times. Dory trawling and hand-lining had almost completely superceded this method after 1870, but a few vessels continued to fish this way until early in the 20th century. The fish boxes adjacent to the hatches are for sorting the catch, each man having his own box to keep track of his share. The fish boxes and the cabin trunk are lined with bait boards for cutting bait and baiting hooks.