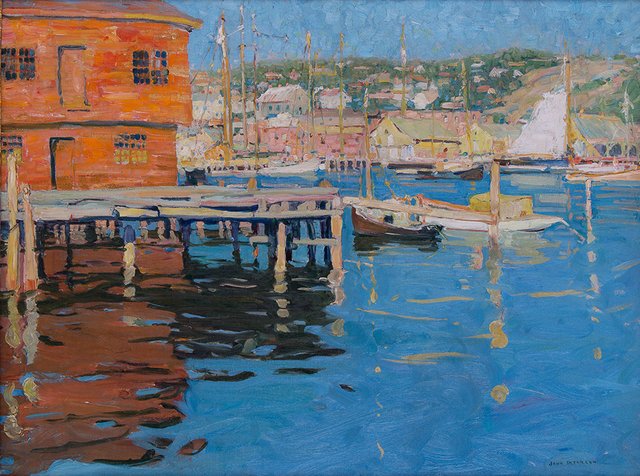 On display in the Museum's third floor Atrium Gallery are six paintings all dating to the first quarter of the 20th century, a time of great activity in and around Gloucester’s working waterfront. The city's skyline appears in all of them as seen from East Gloucester looking toward the "downtown" and from Rocky Neck looking back toward East Gloucester. There are also more intimate views done in Harbor Cove, on the busiest corner of the harbor during the early 1900s. Together, they offer a lively and evocative portrait of a place.

For generations, the distinctive skyline that encircles Gloucester’s Inner Harbor has fascinated artists. Since Fitz Henry Lane (1804–1865) created his earliest lithographic view of the town in 1836 through today, the wharves and warehouses that line Gloucester’s waterfront as well as the residences and meeting houses beyond them have appeared in an extraordinary number of paintings by a wide range of American artists. And against this timeless backdrop, men employed in the fisheries go about their daily routines and an endless stream of vessels moves in and out of the harbor. Often the clock tower of Gloucester’s City Hall dominates the landscape, assuring the viewer that the composition is indeed of Gloucester. The distinctive steeples of the churches and meeting houses strung out along Middle Street also appear with regularity, piercing the horizon and enriching the scene. As art historian James F. O'Gorman has written, no one artist has “held exclusive rights to correct perception,” but rather each who has found inspiration in Gloucester’s harbor and the neighborhoods that surround it has offered “a revealing aspect of our composite portrait.”