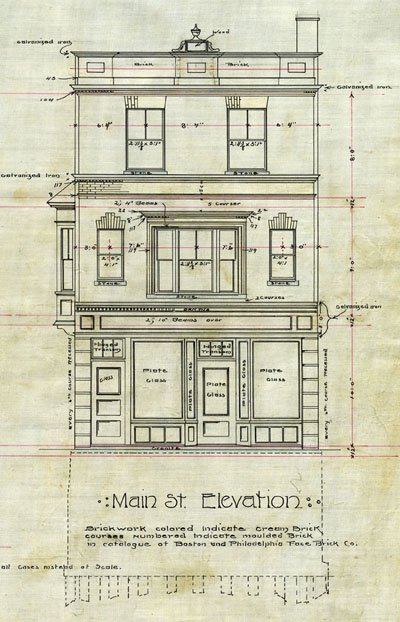 Phillips & Holloran, one of Cape Ann's most successful architectural firms, produced 300-plus sets of drawings while in business from 1894 through the 1960s. The plans, which were given to the Museum in 2011, include drawings, blueprints and elevations of private residences, civic buildings, summer hotels, artist studios and commercial structures.

Offered for educational enrichment and visual enjoyment, the exhibition and related programming is intended to pique visitor’s interest in architecture on Cape Ann and deepen their understanding of what it takes to move from an idea to a finished product. Individual projects, representing structures that were built and some that were not, are explored along with the development of selected neighborhoods in Gloucester, Rockport and Manchester-by-the-Sea. By focusing on this one architectural firm working in one location, Design/Build broadens our understanding of how architecture has contributed to our sense of place.

Phillips & Holloran, Architects, and the firm from which they evolved, were in business in Gloucester, Massachusetts, from the 1890s through the 1960s. Their output included private residences, civic buildings, summer hotels, artist studios and commercial structures. They did new construction as well as renovations and additions to projects initiated by other architects. The principals in the practice were Ezra L. Phillips (1870–1937) who started the firm in 1894; Timothy Francis Holloran (1883–1966) who was apprenticed to Phillips as a young man and became a partner in 1926; and Robert T. Holloran (1919–2008) who received a degree in architecture from Wentworth Institute before joining in business with his father. Working during a time that witnessed the professionalization of the field of architecture, these men and their associates left an indelible mark on a substantial and important swath of Cape Ann’s built environment.

The exhibition features an array of drawings, including plans drawn for the City of Gloucester as it strove to provide students with modern school buildings during the first quarter of the 20th century; plans drawn for local businesses that were making ongoing upgrades and improvements to their properties as the local economy prospered; and plans for residential projects, from grand summer cottages built along the shoreline during the 1920s, to modest in-town houses designed for families across Cape Ann, to housing built specifically for veterans in the early 1950s.

The Museum will be partnering with Historic New England and other regional resources to provide a broad selection of programs and events designed to complement the exhibition—find out what's scheduled on our exhibition-related programs page. Join CAM's email list for the most up-to-date information.

Review by Elizabeth S. Padjen, FAIA in the Fall 2016 issue of ArchitectureBoston