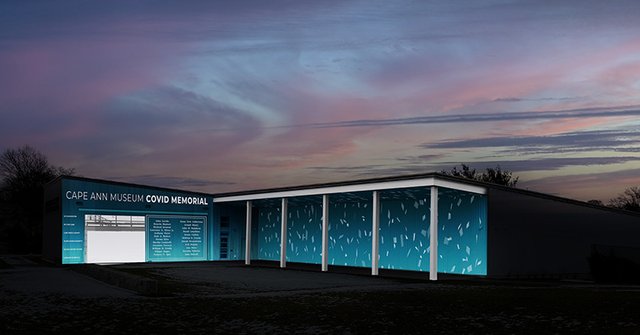 On March 10, 2020, the coronavirus pandemic forced the state to shut down and declare a state of emergency. To commemorate the community’s profound loss one year on, the Cape Ann Museum, in partnership with the City of Gloucester and LuminArtz, created a temporary art installation to pay tribute to those who died from the deadly virus—including, at the time, at least 35 people in Gloucester, 55 people from Cape Ann, and more than 2,200 people from Essex County. The Virtual Memorial Ceremony, live-streamed on Facebook and Vimeo, served as the opening for the Cape Ann Museum COVID-19 Memorial and as a vigil for those lost. Due gathering restrictions at the time of the event, visitors were not allowed to be onsite during the ceremony, but instead were encouraged to watch from home and visit the memorial in person afterwards.

Following the Live-streamed Virtual Memorial Ceremony held at the Janet & William Ellery James Center at the Cape Ann Museum Green on March 10, the Memorial was open to the public to visit and reflect through March 14.

The Memorial was comprised of three parts: a video art installation from LuminArtz, the Cape Ann Cairns Memorial, and the Gloucester Memorial Quilt. These interconnected projects sought to humanize the unfathomably large number of deaths in the past year, place the deeply felt local losses in the broader national conversation, and provide a space for visitors to take steps toward the long process of grief and healing.

The Museum is grateful to the following individuals for their contributions to the Memorial:

We remember the following individuals and many others who died as a result of COVID-19:

To commemorate the 55 individuals lost from Gloucester, Rockport, Essex, and Manchester, the four towns and cities of Cape Ann, volunteers from Cape Ann Tree Service built 55 cairns out of Cape Ann Granite on the back side of the White Ellery House. Cairns, a traditional Scottish marker of respect, can be found around the world. Locally, they can be seen on trails throughout the woods of Cape Ann and along the coast at Halibut Point State Park. They are used as markers, memorials, and organic expressions of creativity. Making these cairns out of Cape Ann granite as part of the COVID-19 Memorial acknowledges the deep sense of history and place embedded in this region.

By request, small markers were placed in front of some of the cairns to remember a specific individual who died of COVID-19. Unless personally requested, the cairns remained anonymous, holding space for all those who had been lost from the region. Community members were invited to visit the cairns to pay their respects and reflect on the year. The Museum also encouraged visitors to bring tokens of remembrace, traditionally small stones or flowers, to leave on the cairns.

At the completion of this temporary memorial, the granite stones that were used to create the cairns were returned to the rock pile on site. In the future, they will be incorporated into a field stone wall that will wrap the Cape Ann Museum Green, forever incorporating this memorial into the campus.

Video art installation by Pamela Hersch in collaboration with LuminArtz.

From March 10 – 14, the Cape Ann Cairns and the Janet and William Ellery James Center were illuminated by LuminArtz. By collaborating with local artists, businesses, and the community to transform streetscapes into vibrant installations, LuminArtz brings art to light. The Cape Ann Museum is proud to partner with LuminArtz to bring light to the COVID-19 Memorial in these dark times.

Pamela Hersch is a Boston-based, multidisciplinary artist originally from Mexico. With her video art installation, local COVID-19 deaths were placed within the regional, state, and national context. Hersch uses a combination of organic and artificial elements to tell a story and to transform spaces.

The Gloucester Memorial Quilt was coordinated by the Cape Ann Museum and Roseanne Cody, Board Member on the Gloucester Council of Aging, at the request of Mayor Sefatia Romeo Theken. This quilt memorializes the Gloucester citizens who died as part of the COVID-19 Pandemic, some remain anonymous and others are personally identified by request of the families. The names were embroidered by Monograms by Diane and the squares were quilted together by Ingrid Schillebeeckx-Rice, a member of the Burlington Quilters Guild. There is a long-standing tradition of quilts used to memorialize and comfort, most significantly the AIDs Memorial Quilt which was displayed for the first time in 1987 and continues to this day. Following its display at the James Center the quilt will be hung at Gloucester City Hall.