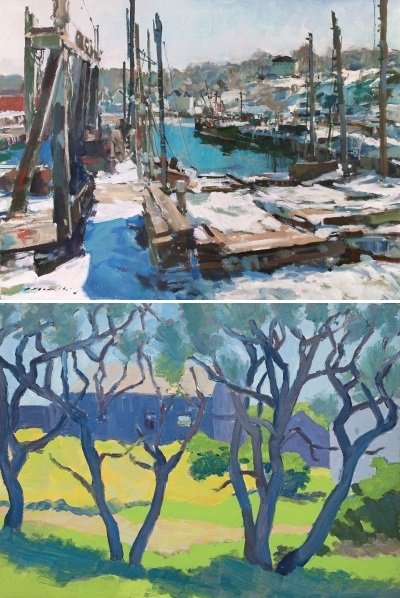 The growth of two of New England’s oldest and most revered summer art colonies is the subject of a special exhibition at the Cape Ann Museum. Cape Ann & Monhegan Island Vistas: Contrasted New England Art Colonies was organized by the Museum in collaboration with the Monhegan Museum of Art & History in Monhegan, Maine.

The exhibition features works by artists who visited and were inspired by both Cape Ann and Monhegan. Among them are Theresa Bernstein, Walter Farndon, Eric Hudson, Margaret Patterson and Charles Movalli. The exhibition was curated by art historian James F. O’Gorman; it was shown first in Maine and is now on view at the Cape Ann Museum through March 31, 2022.

Monhegan and Cape Ann trace the roots of their respective art colonies back to the mid-19th century and specifically to the years immediately following the Civil War. Summer enclaves which sprung up during that time gave artists the chance to socialize with one another and to work together, sharing ideas, trying out new techniques and critiquing each other’s work.

Monhegan is much smaller than Cape Ann and more isolated, however, both places offered their own vistas and many artists moved between the two colonies. During the early 20th century, both communities saw a surge of artists, professionals and amateurs, visit their shores. Today, Monhegan and Cape Ann continue to be vibrant regional art colonies of national significance. One of the artists featured in Island Vistas is Eric Hudson (1864-1932) who was an accomplished painter and photographer. An expanded collection of Hudson’s paintings is on display in an adjoining gallery, giving visitors the opportunity to delve deeper into his work.