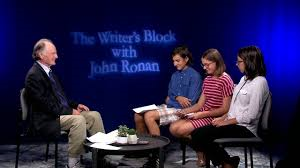 John Ronan, host of "The Writer's Block," and Studio 1623 invite all former guests of the show and the public to a taping of the season finale. Doors open at 1:00 p.m. for a 2:00 p.m. taping followed by Q&A. Free and open to the public.

The program will celebrate and thank all the writers and artists who have made "The Writer's Block" possible and will honor Cape Ann for its artistic energy and talent. For a list of all the guests who have appeared on the 375 episodes in the series, go to: http://www.theronan.org/the-writers-block/.

This taping will feature interviews with some of the guests who appeared the first year of the award-winning series, in 1990–91—Sharron Cohen, Christopher Leahy, Kim Bartlett, Sue Jhirad, and Jackie (Bigford) Fearer—and will include clips from those early, pioneer programs.

“The series was made possible by the generous, dedicated writers and artists who work and live in our area.  This is a chance to honor their talent,” Ronan says. “The 30th year is a real milestone, a long run in any market, at any level. I am deeply grateful to the hundreds of guests who made that possible—and fun.”

John Ronan, producer and host of "The Writer's Block," is a former Gloucester Poet Laureate and a National Endowment for the Arts Fellow in poetry. His most recent book, Taking the Train of Singularity South from Midtown, appeared in 2017 (www.theRonan.org).