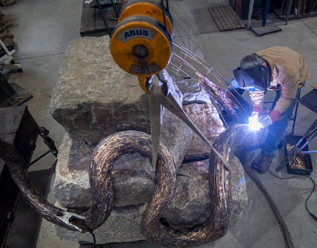 Nationally known artist Chris Williams, who maintains a studio and workshop in Essex, MA, is putting the finishing touches on a nine-foot-high bronze and granite sculpture depicting the mythical sea serpent that dozens of Cape Ann residents reported seeing off the coast beginning in 1817. The sculpture was commissioned in recognition of recently retired Museum Director Ronda Faloon.

Williams, an accomplished sculptor who has created many public works of art across New England including installations at Logan International Airport, Kendall Square in Cambridge and Salem State University, designed the sea serpent so it rises from a granite base. Custom glass is filling seams between the granite blocks, forming a glass mortar effect. This glass will be lit from within to create light between the stones. More than 120 museum and community members contributed to fund the project.

“We hope that this work of art, conceived and created by an exceptionally talented local artist, will pay homage to Ronda, as a wonderful leader of the Cape Ann Museum for many years,” said Oliver Barker who succeeded Faloon as Director.

During her 13-year tenure, Faloon led the Museum through tremendous growth, including a major renovation in 2014. The number of visitors and the Museum’s overall role in Cape Ann’s cultural community grew steadily under Faloon’s leadership.

Here are links to Williams’s work as well as a YouTube video showing the creation of the sea serpent: