The Cape Ann Museum invites the public to participate in reading abolitionist Frederick Douglass’ 1852 speech What to the Slave is the Fourth of July.  Organized under the auspices of Mass Humanities, the event is designed to bring people from all walks of life together to read Douglass’ work and reflect on how themes addressed in the speech still resonate with Americans more than 150 years after they were written.

Reading Frederick Douglass Together is presented by the Cape Ann Museum in partnership with the Cape Ann Slavery and Abolition Trust, a collaboration of the Gloucester Unitarian Universalist Church and the Unitarian Universalist Society of Rockport.  The event is designed to bring people from all walks of life together to read aloud Douglass’ work and reflect on how themes addressed in the speech still resonant with Americans more than 150 years after they were written.  Copies of Douglass’ speech will be distributed to all in attendance and the public will be called upon to take turns reading passages from it in succession until they have read it all.

Frederick Douglass had strong ties to the North Shore, living with his family in Lynn from 1841 to 1847 and traveling to Cape Ann on at least one occasion to speak about the abolitionist movement. And yet, Douglass’ connection to this area is not widely known, nor is the extent to which the abolitionist movement was active in this region during the 19th century.  Reading Douglass’ speech provides the opportunity to share this hidden history in an intentional and inclusive manner.  Moreover, it offers the chance to explore the disparity between how various ethnic, racial and socio-economic groups have experienced what is means to be an American, now and in the past.

Once Douglass’ speech has been read, participants will be invited to discuss the significance of the oration.  Members of the Cape Ann Museum staff, and the Cape Ann Slavery and Abolition Trust will facilitate the discussion with Nicole McClain, President of North Shore Juneteenth Association Inc. in Lynn.

Reading Frederick Douglass Together is free and open to the public; participants are asked to register through Evenbrite. The reading will be held outdoors at the Cape Ann Museum Green and livestreamed on Facebook and Vimeo. 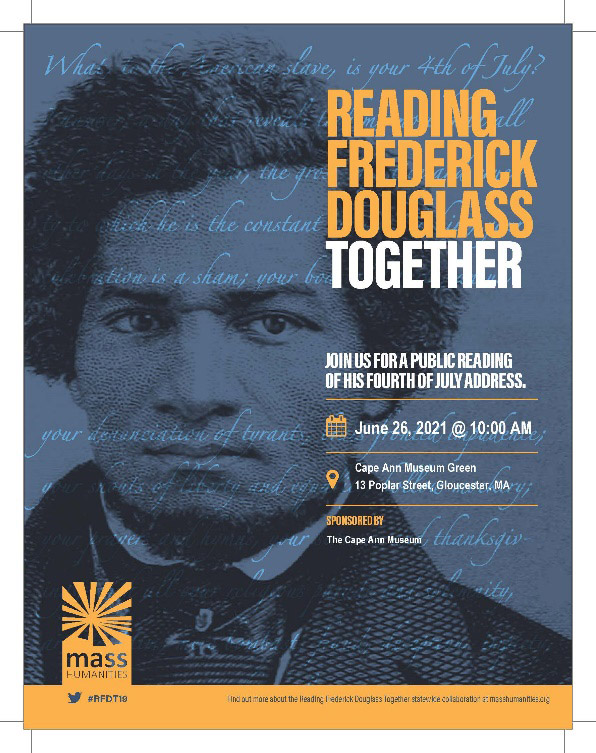