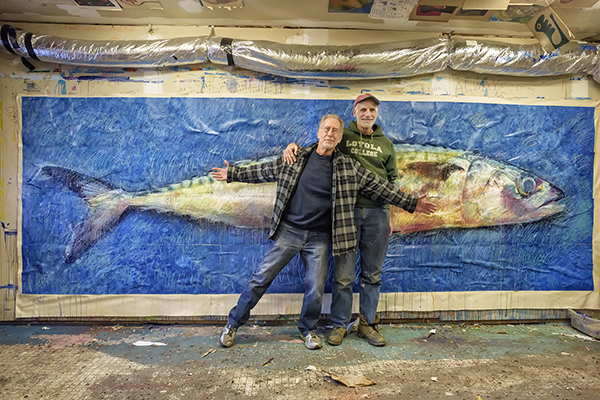 Image courtesy of the artists.

Learn about the artists' process and take a closer look at Mackerel, Sakin's and Goldberg's recent largescale collaborative work. This program is free for CAM Members or with Museum admission. To secure a seat, please reserve online at Eventbrite.

Paul Cary Goldberg is a self taught photographer who began his career by photographing his friends, neighborhood personalities and the music clubs of Somerville, MA, in the 1970’s. A Cape Ann resident since 1995, his photographs are in many public and private collections including: the Boston Public Library; the Cape Ann Museum, Gloucester, MA; Cleveland Museum of Art, Cleveland, OH; the DeCordova Museum, Lincoln, MA; Fogg Museum at Harvard University, Cambridge, MA; the Museum of Fine Arts, Boston, MA; Santa Barbara Museum, Santa Barbara, CA. His photographs have been featured in many solo and group shows, magazines and newspapers throughout the United States and Europe. For more information about Paul’s work visit paulcarygoldberg.com.

Jon Sarkin became an artist in 1989. His wildly prolific artistic output was created by a condition called "sudden stroke." Jon's distinctive artwork, which draws influence from pop culture, literature, and music, has garnered the attention of art experts and non-experts around the world. Here's the gist of what actually happened to make Jon the artist he is today. Following his stroke, Jon became obsessed with drawing. So he drew, all the time. He painted, made collage, wrote poetry, scribbled over and rubbed dirt into things. Some people noticed and kinda liked it. And Jon drew some more, all the time. For more information about Jon’s work visit jsarkin.com.