Jeffrey Bolster and "The Mortal Sea"

Join author and Professor of History at the University of New Hampshire, Jeffrey Bolster, for a discussion of his book The Mortal Sea: Fishing the Atlantic in the Age of Sail (Harvard University Press, 2012).

Licensed for many years by the U.S. Coast Guard as "Master of Motor, Steam, and Auxiliary Sail Vessels of not-more-than-200-tons upon All Oceans," Bolster continues to mess about in boats. He earned his undergraduate degree at Trinity College, his MA from Brown University, and his PhD from Johns Hopkins University. He lives with his wife Molly in Portsmouth, New Hampshire, and when not in Plymouth they can likely be found sailing their Valiant 40, Chanticleer, to the Caribbean.

The Mortal Sea is available in the Museum's Online Shop.

About The Mortal Sea, from Harvard University Press:

Since the Viking ascendancy in the Middle Ages, the Atlantic has shaped the lives of people who depend upon it for survival. And just as surely, people have shaped the Atlantic. In his innovative account of this interdependency, W. Jeffrey Bolster, a historian and professional seafarer, takes us through a millennium-long environmental history of our impact on one of the largest ecosystems in the world. 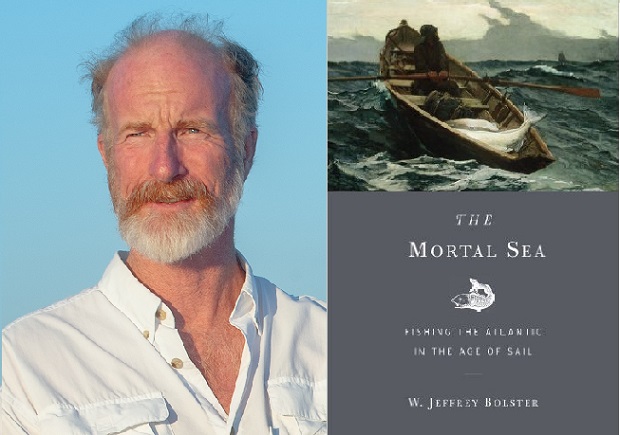 While overfishing is often thought of as a contemporary problem, Bolster reveals that humans were transforming the sea long before factory trawlers turned fishing from a handliner’s art into an industrial enterprise. The western Atlantic’s legendary fishing banks, stretching from Cape Cod to Newfoundland, have attracted fishermen for more than five hundred years. Bolster follows the effects of this siren’s song from its medieval European origins to the advent of industrialized fishing in American waters at the beginning of the twentieth century.

Blending marine biology, ecological insight, and a remarkable cast of characters, from notable explorers to scientists to an army of unknown fishermen, Bolster tells a story that is both ecological and human: the prelude to an environmental disaster. Over generations, harvesters created a quiet catastrophe as the sea could no longer renew itself. Bolster writes in the hope that the intimate relationship humans have long had with the ocean, and the species that live within it, can be restored for future generations.

This lecture was originally scheduled for Saturday, February 18.