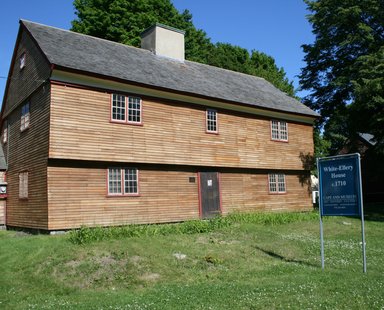 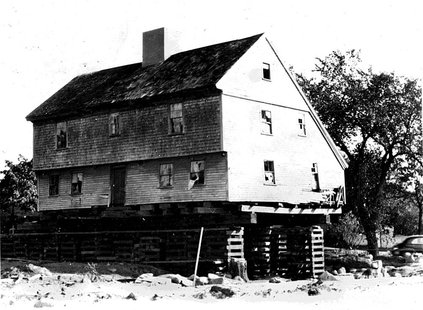 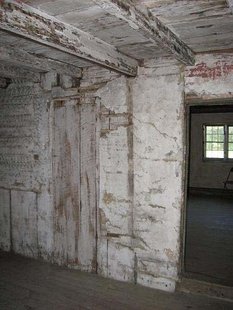 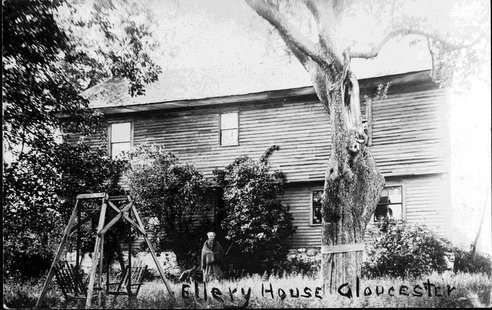 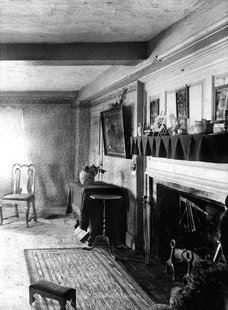 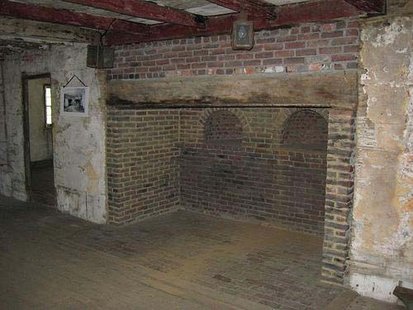 The kitchen fireplace with two bake ovens as it appears today.

From 2010–2017 the White-Ellery House served as the backdrop for Insights On Site—a series of one-day contemporary art installations held in and around the historic property. Most recently, an installation created by artist Stephanie Terelak Benenson of Harbor Voices and LuminArtz entitled In Gratitude was projected on the barn at the site.

The White-Ellery House, located at 245 Washington Street in Gloucester at the Route 128 Grant Circle Rotary, was built in 1710 and is one of just a handful of early eighteenth century houses in Eastern Massachusetts that survives to this day. It is a 2 ½ story "saltbox" structure with a massive central chimney that once serviced six fireplaces. Unlike other structures as old as this, the White-Ellery House has had very few interior alterations over the years. Stepping inside today, visitors enter much the same house they would have 300 years ago.

The White-Ellery House is on the National Register of Historic Sites because of its unique construction and important interior features. The most important elements of the House include the following:

The house was built for the Reverend John White (1677–1760), brother-in-law of Cotton Mather, former Chaplain at Fort Saco, author of New England's Lamentations (1734) and Gloucester's first settled minister. In keeping with White's esteemed position in the community, the House exhibits a certain elegance and refinement, perhaps best reflected in the surviving interior details.

At the time the House was constructed, the surrounding area was Gloucester's Town Green—the center of the community. The Reverend Mr. White's church, also called a meeting house, was located on the Green and most of the townspeople lived in the immediate area. The Annisquam River was readily accessible and was an important means of transportation for early residents, most of whom were farmers or simple tradesmen, and their families.

The second owner of the White-Ellery House was James Stevens who kept it as a tavern between 1735 and 1740. The House was owned next by the Ellery family who retained ownership of it until 1947. Although the center of Gloucester long ago moved from the Town Green to the Harbor Village, the site remains the entrance to Gloucester and an important historical site.

In 1947, plans were unveiled showing the soon-to-be-constructed Route 128 coming into Gloucester directly through the Town Green and literally on the doorstep of the White-Ellery House. Realizing the House's importance, the City of Gloucester took it by eminent domain and sold the building to the Cape Ann Historical Museum with the proviso that it be moved immediately. Under the leadership of Museum president Alfred Mansfield Brooks, the House was picked up and moved approximately 100 yards to its present location. For the next decade, Brooks oversaw restoration of the structure, a process which successfully preserved much of the original fabric of the House and which has allowed visitors today to see this gem of early eighteenth century architecture, still standing on the edge of Gloucester's former Town Green. The barn alongside the White-Ellery House is also an early eighteenth century structure, built in the mid-1730s, exhibiting the same early construction techniques as the House.

Today, the White-Ellery House serves as a study property, inviting visitors to explore not only the history of early American architecture but also the story of an ordinary New England family who worked hard to provide for themselves and to raise their children, who took part in events of local and national importance, and who sought to preserve their legacy in the face of an ever changing world. The House also serves as a unique venue for art installations and related programming which are held at the site during the summer months.