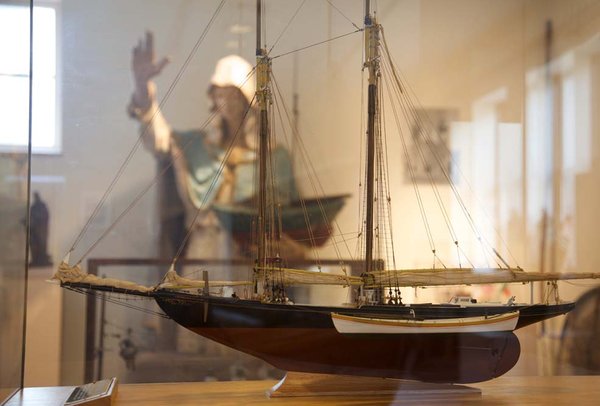 The schooner Benjamin W. Latham was designed by Thomas F. McManus and built by Tarr & James shipyard at Essex, Massachusetts, in 1902. McManus was responsible for dramatic changes in the New England fishing fleet starting in the 1880s. His schooners were known for their speed, safety and beauty under sail.

The Benjamin W. Latham was a relatively small schooner just 84 feet in length with a gross weight of 72 tons. From 1906 to 1943 she operated as a mackerel seiner and dory trawler out of Fulton Fish Market, New York City. She foundered off San Juan, Puerto Rico in 1943.

This model represents a unique collaboration between father and son model makers. Erik Ronnberg, Sr. was born in Sweden and settled in Rockport in 1945. He quickly became a master rigger along Gloucester's waterfront and a well known shop modeler. Today, his son Erik Ronnberg, Jr. (who learned the craft from his father) is one of the most highly regarding model makers in the country.