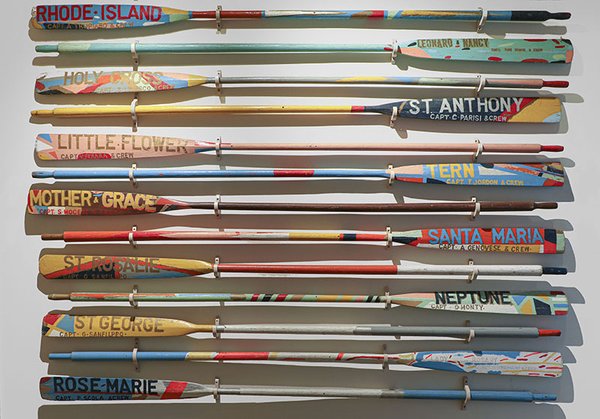 As he would remember late in life, Gloucester fisherman Sam Novello began creating these painted oars in 1957:

I decided to do something to help us remember the Italian-American fleet and our Italian-American heritage. So up came the idea that each boat would have its own oar painted all with different identification colors. Enlisting the help of children in his neighborhood, Novello and his young helpers eventually decorated close to 70 oars, which are now part of the Museum’s collection. Each bears the name of a Gloucester fishing boat which made a contribution to the annual St. Peter’s Fiesta, and each year the oars were carried in the Fiesta procession by the children of the sea captains.

Before 1900, there were only a few Italian families in Gloucester. In the early years of the 20th century, however, the number grew rapidly as Sicilian-born men filtered into the community, most coming from Boston. A predominantly Sicilian neighborhood sprang up in Gloucester as early as 1905 in the waterfront neighborhood known as The Fort. By May 1908, the local newspaper reported:

During the past week or two, several of the Italian fishermen who for a long time have made T-wharf, Boston, their headquarters, have come here with their big power dories and have seemingly transferred their base of operation here.

In Gloucester, these new members of the community were close to rich fishing grounds and had easy access to nearby markets for their catch. As they were able, family members were sent for in Sicily. The community in The Fort grew rapidly, and by 1930 there were 1,500 Sicilians in Gloucester. After World War II, the pace of immigration quickened, as people fled the destruction and economic problems in Europe.

The Sicilians who settled in Gloucester brought with them a rich cultural heritage and a strong work ethic. They played a major role in introducing gasoline-powered boats into the local fleet that served as a bridge between old-time sailing schooners and the modern, diesel-powered draggers. They were also very good businessmen who were willing to harvest and market previously unpopular species of fish.

The family of Sam Novello, the man responsible for creating this collection of oars, is typical in many ways. His father, Bonaventura, left Sicily as a young boy, arriving in this country in 1909. At the age of 21, he and his wife Vicenza married and settled on The Fort. Together they would raise six boys—Joseph, Nicholas, Samuel, John, Anthony, and Dominic—all of whom became fishermen.