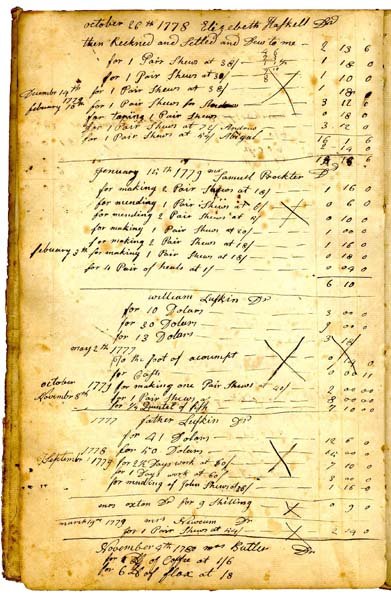 Thomas Lufkin was born in Ipswich and moved to Gloucester as a boy when his father bought land just over the town border, near Walker's Creek in West Gloucester. Thomas married Judith Choate in 1780 and they had seven children. While primarily a shoe maker like most of his neighbors, Lufkin was not averse to trading a few commodities when asked, such as the coffee and flax bought by Mrs. Butler.

The page from this account book shows some of his customers:

Elizabeth Haskell, wife of Deacon Zebulon Haskell (the Haskells were neighbors of Thomas Lufkin); Samuel Procter, who lived in Ipswich just over the town line; William Lufkin, Thomas's older brother (born in 1751) who was married to Judith's older sister Patience Choate; Father Lufkin, Thomas' father, also named Thomas (note that he is exchanging pounds, shillings, and pence for dollars for both his father and brother); Mrs. Oxton, maiden name Mary Newcomb, who married William Oxton in 1771; Mrs. Newcum (Newcomb), maiden name Mary Coas, who was Mrs. Oxton's mother; Mrs. Butler, who was either Phebe Lane, wife of John Butler who died in West Parish in 1781, or Eliza Gott, wife of Steven Butler, neither of whom have deaths registered here.