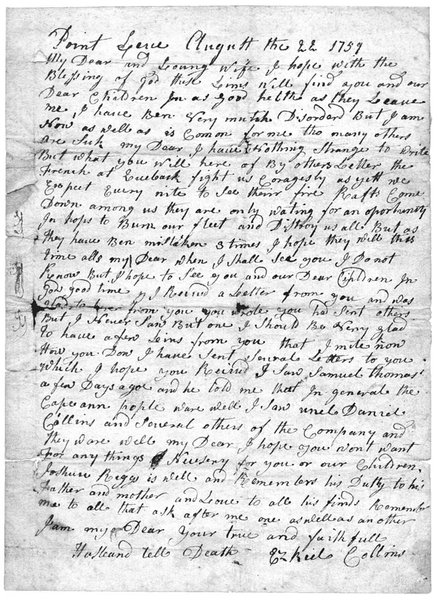 John J. Babson in his "Notes and Additions to the History of Gloucester, Part I," published in 1876, transcribes a letter written on August 22, 1759, from Ezekiel Collins to his "Dear and Loving Wife" Mary (Addams). The original of that letter now resides in the Museum Archives. Ezekiel Collins wrote the letter from Point Leve on the St. Lawrence river just outside Quebec City about three weeks before the city fell to the English in the last of the French and Indian Wars (1754-1763). One of the enemy's (unsuccessful) tactics was to send burning rafts downriver to set the British ships afire. Ezekiel, who was not a proficient speller, talks of expecting "every nite to see their fire Rafts Come Down among us they are only wating for an opportunity in hopes to Burn our fleet and Distroy us all. But as they have Ben mistaken 3 times I hope they will this time also."

There is a brief notation in a diary kept by Rev. Samuel Chandler (pastor of First Parish 1751­1775) that on October 12, 1759, there was "great rejoicing; illumination; firing of cannon here [Gloucester] on account of the reduction of Quebec" but little is known about Gloucester's part in this particular battle. Ezekiel's letter, in which he mentions having spoken to Samuel Thomas, uncle Daniel Collins, Joshua Riggs and "Several others of the Company," is therefore a rare and valuable record that men from Gloucester were among the troops in this decisive encounter.

Ezekiel, who was thirty-two and the father of three daughters at the time he wrote the letter, survived the war and returned to Gloucester a few months later. By December 1760 he had resumed his role as the master of schooners plying the southern trade, and spent most of 1761 sailing the Jolly Robbin to and from St. Kitts in the Caribbean.

Sadly uncle Daniel did not come home. His name appears on a list of deaths compiled by Rev. Chandler: "1759, Nov., Daniel Collins, expedition." The fate of the other Gloucester men remains uncertain.