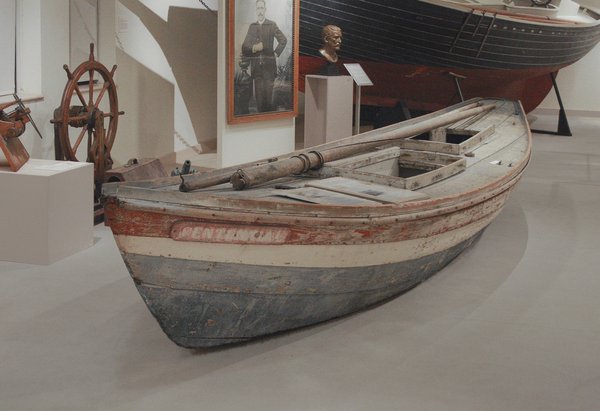 In 1876, coinciding with United States' first centennial, Danish-born Gloucester fisherman Alfred Johnson (1846–1927) made history with the world's first recorded single-handed crossing of the Atlantic. Leaving from Gloucester in mid-June in a small dory he named Centennial, Johnson landed in Liverpool, England, in late August, the trip totaling 66 days.

In his book Cape Ann: Cape America (1971), Herbert A. Kenny devoted a chapter to Gloucester’s “Lone Voyagers” and to "Centennial Johnson," as Alfred Johnson came to be known. Kenny noted that Johnson’s dory was not an ordinary one but rather had been specially constructed by local boat builders Higgins and Gifford to withstand anything the unpredictable North Atlantic could throw at it. The 20-foot long vessel was constructed of oak with reinforced planking and was decked over. It had a cockpit from which Johnson could sail the boat, a mast and a bowsprit. The sturdy vessel also had a centerboard (which ordinary dories did not) and watertight compartments below decks where Johnson stowed the gear he needed for his voyage. According to Kenny, Johnson’s supply of food for the journey included condensed milk, canned meats, hardtack, tea, coffee and molasses. He also carried a kerosene stove.

Capt. Johnson followed the North Atlantic shipping lines, sailing at night and sleeping during the day. For navigation, Johnson relied on a compass. Mid-way through his trip, Johnson’s dory capsized in a storm. Miraculously, he was able to right it after clinging to the overturned vessel for 20 minutes. He arrived in Liverpool on August 21, 1876.

Following a few months' stay in England, Johnson returned home aboard a passenger ship, with Centennial in tow. “Johnson returned to Gloucester, high praise and feting,” historian Herbert Kenny recounted. “After the feting he quietly returned to fishing. He lived to be eighty, hale and hearty and happiest when he was playing cards.” When asked in retirement what had prompted him to attempt such a dangerous feat, Johnson replied he had been a “damn fool!”