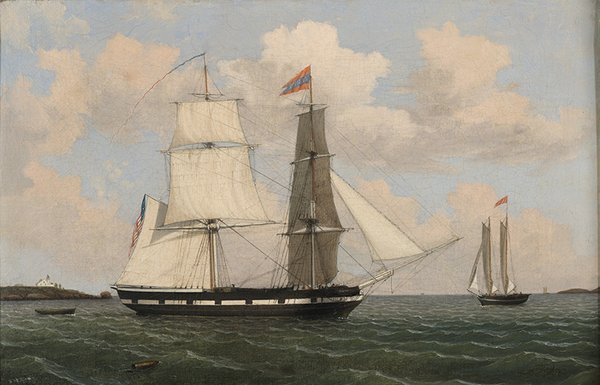 A selection of works by Fitz Henry Lane:

By the late-1840s, Gloucester’s economy was booming, thanks to the railroad which arrived in 1847 and the Surinam trade which provided a profitable outlet for fish caught and processed in Gloucester. Edward Babson (1811-1879), owner and master of the brig Cadet, was one of many in the town who prospered through the Surinam trade.  He was also one who had Fitz Henry Lane capture a likeness of his ship on canvas.

Gloucester merchants became involved in trade with the Dutch colony of Surinam during the 1790s.  Located on the Atlantic coast of South America, the colony generated great wealth for many through its sugar plantations.  Operation of the plantations was reliant on the forced labor of enslaved Africans; in participating in the trade, Gloucester merchants were knowingly supporting the institution of slavery and profiting from it.   The principal cargo brought from Surinam back to Gloucester was molasses (a by-product of sugar production) which was made into rum.  Merchants also brought other items back with them including exotic woods, coffee and cocoa beans, and Dutch china and silver.

In his memoir published in 1974, Alfred Mansfield Brooks made several references to the Surinam trade but  ultimately concluded that his own family along with many others in Gloucester had “selective amnesia” when it came to remembering the trade’s close ties to slavery.

A selection of works by Fitz Henry Lane: