Bill to the town of Gloucester from Nathaniel Haskell Jr., 1776 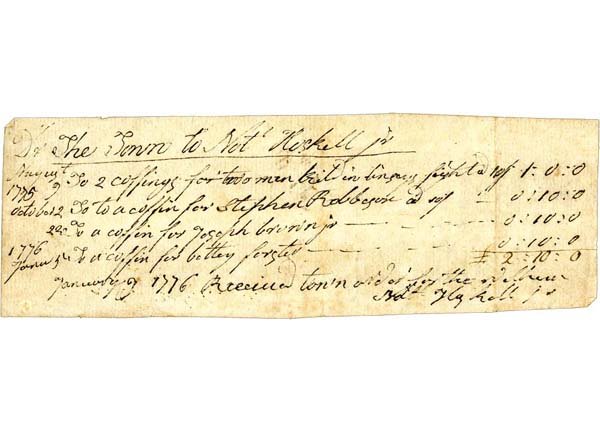 Bill to the town of Gloucester from Nathaniel Haskell Jr., 1776

While this document may be small (it measures only 7" × 2¼") it contains a wealth of information. It tells us, among other things:

Stephen Robbeson (Robinson), Joseph Brown Jr., and Betty Forster were among Gloucester's poor at a time when ailing paupers were often "let out to" (taken care of by) wealthier individuals in the community. These benefactors would then be reimbursed by the town. Stephen Robinson for instance was "let out" to Captain John Low for several years, and in 1765 the town paid Dr. Samuel Plummer for medical treatment for him. For several months before and after Joseph Brown Jr.'s death his wife Lydia was "let out" to her brother-in-law Jonathan Brown. Ten years later two of Joseph and Lydia's sons were bound out (apprenticed) to the same Jonathan Brown by the Overseers of the Poor.