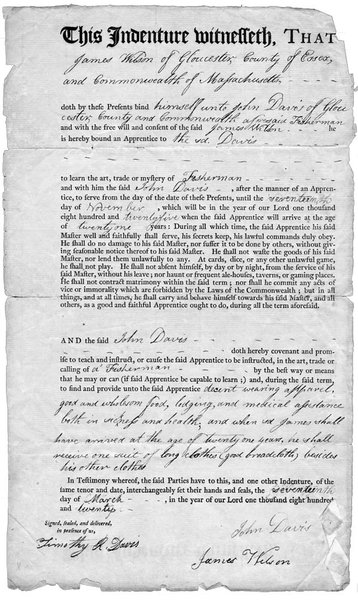 Indenture: a document or a section of a document that is intended as a contract binding one person to work for another for a given period of time.

Indentures could be drawn up for a variety of reasons, but many were formalized agreements between a tradesman and a young apprentice. The master was expected to feed, clothe, and generally take care of the child while teaching him or her a useful trade, in return for which they got the child's labor. Boys were usually in service until they reached 21 and girls until 18. In the 1700s girls were typically taught to sew, spin and knit but by the 1800s this had changed to learning the skills of seamstress or housewife. Boys' professions remained constant and (in Gloucester) were predominately those of mariner, navigator, yeoman (farmer) and cordwainer (shoe maker). It was required that both sexes were to learn how to read and write.

The Gloucester City Archives has a large collection of indentures dating from 1739 to 1852. These have been preserved because they were drawn up by the Overseers of the Poor on behalf of orphaned or impoverished children, and were therefore town documents. Private indentures were often discarded once the contract was terminated, so this indenture in the Museum's archives is somewhat of a rarity. It is dated March 17, 1820, and drawn up between James Wilson, aged 16, and Captain John Davis, fisherman. Davis agrees to teach Wilson "the art, trade or mystery" of being a fisherman while providing him with "decent wearing apparel, good and wholesome food, lodging, and medical assistance." Wilson on his part agrees to serve "well and faithfully." To keep his master's secrets, obey his commands and not waste his time playing cards or dice. Neither shall he frequent ale-houses and taverns, nor contract to be married. In five years time, when Wilson turns 21, he will step out into the world a free man with a marketable skill and wearing a suit of good broadcloth provided by Davis.

So who were James Wilson and John Davis and why did they make this agreement? James Wilson states that he was "of Gloucester" but there is no birth registered to him here. The indenture, however, tells us that he was born on November 17, 1804, twenty-one years before his release date. We can also deduce several other things about him from this document: that he may have been fatherless or orphaned at the time and had to take charge of his own future; that he was not destitute because the contract was not handled by the Overseers of the Poor; and that he had evidently been at least minimally educated as he signed his own name.

Later records show that he did indeed become a fisherman, married Eliza Atkinson three years after his apprenticeship ended, had at least four children, and died at the age of sixty. Captain John Davis was one of the eight children of Daniel and Lydia (Riggs) Davis. His mother moved to Sandy Bay (Rockport) around 1800 after his father's death, taking her children with her. As a result Captain John was present during the "Battle of Sandy Bay" in 1814, and was one of the three men who fired on the retreating English. After Rockport gained its independence in 1840 he was chosen moderator of the first town meeting. He was married twice and had four daughters and a son. He remained a mariner but from 1841 through 1849 he was also the keeper of the Straitsmouth lighthouse (at an annual salary of $350).

The sole witness to the indenture, Timothy R. Davis, was Captain John's older brother. This research uncovered a connection between Wilson and Davis that may well explain the indenture. It turns out that James Wilson was the much younger brother of Captain John Davis' first wife Esther. Their mother Ann Wilson was still alive at the time the contract was signed but we do not know what happened to their father. Lacking a death record we can only surmise that he had passed away by 1820, probably at sea, so fatherless James had to act on his own behalf, ensure himself a trade, and gain the protection of his sister's husband.