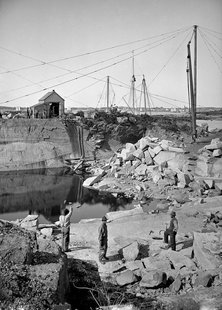 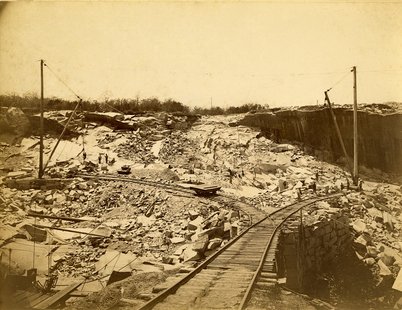 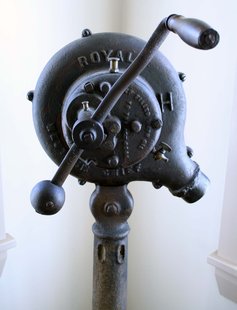 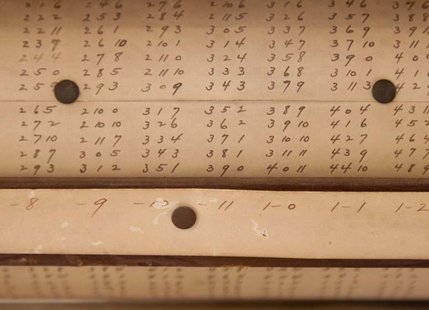 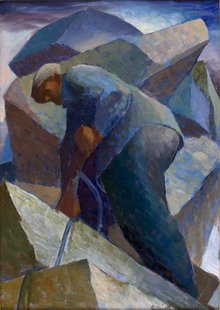 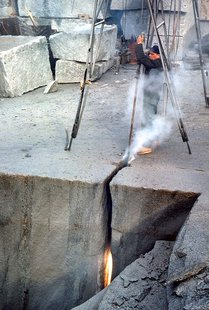 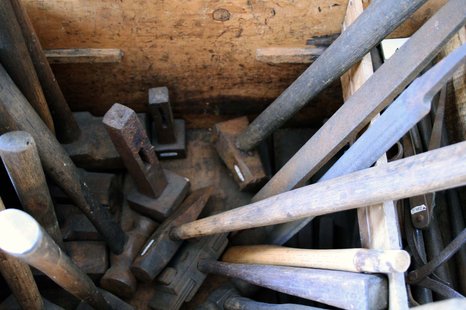 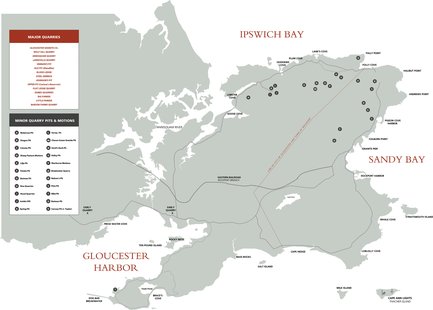 The harvesting of granite from quarries dug deep in the earth was big business here on Cape Ann from the 1830s through the early 20th century. Second only to fishing in economic output, for 100 years the granite trade played a pivotal role in the local economy providing jobs for people from throughout New England and around the world, turning profits for some and generating tons and tons of cut granite that was used here on Cape Ann and shipped to ports all along the Atlantic seaboard.

Granite quarrying started slowly in this area in the late 18th century with small operations peppered across the rocky terrain. Construction of a fort at Castle Island in Boston Harbor in 1798 followed by a jail in nearby Salem in 1813, jump started the granite business here on Cape Ann. During the 1830s and 1840s, the trade grew steadily. By the 1850s, the stone business was firmly established and Cape Ann granite was known throughout the region. So extensive and so awe-inspiring were operations during the second half of the 19th century that some observers feared the business might actually run out of stone.

While granite was taken from the earth in all different sizes and shapes, Cape Ann specialized in the conversion of that granite into paving blocks that were used to finish roads and streets. Millions of paving stones were shipped out of Cape Ann annually, destined for construction projects in New York, Philadelphia and all along the Atlantic seaboard. While paving blocks were basically uniform in size, there were inevitably subtle differences, leading some to be referred to as Philadelphia blocks while others were identified as Boston blocks or Washington blocks.

The cutting of paving stones kept Gloucester and Rockport workers busy throughout the year, but particularly during the winter months. (It was said that granite was more difficult to wrestle out of the earth during the winter, hence the cutting of paving blocks out of larger pieces of stone kept men employed during the colder months.) Come summer, large shipments of blocks would be packed aboard specially designed sloops and transported to distant ports. A newspaper article from an August 1879 edition of the Cape Ann Advertiser gives a sense of the quantity of blocks workers could produce over the winter months, and also the range of places Cape Ann paving stones were shipped to in the years following the American Civil War:

The Rockport Granite Co. has lately completed the delivery of sixty thousand paving blocks to Philadelphia, and is at present busy in delivering two hundred thousand to New York City. The Co. is also furnishing a large quantity of wharf stone for the South Boston flats improvement. The Pigeon Hill Granite Co. is also busy on various contracts, and the feeling is beginning to prevail that the stone business is coming up.

→ The Finnish Effect — What drew so many artists to the far end of Cape Ann?